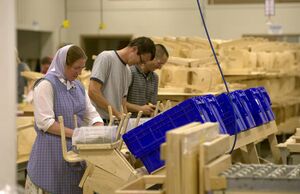 The Bruderhof (meaning “community of brethren”) are a network of Christian communist communities that split from the Hutterite movement. Their website says they have 2,700 members living in twenty-three communities on four continents.[1] They live without private property and with very few personal possessions. The Bruderhof communally provide meals, basic education, and health care, and they communally own their cars. When someone needs to pay for something like tuition for medical school, they draw from communal funds. Although the Bruderhof society is hierarchical, their factories are not.[2]

Factory workers come and go whenever they please, and they report to no boss. "Nor is there any hierarchy within the factory," writes the ecosocialist Joel Kovel. Factories have managers, but they "have no particular authority beyond their differentiated task". The factories do not accumulate wealth beyond what is needed to support the Bruderhof's anti-consumerist, materially simple lifestyles. Adults and children work alongside each other. Workers are not paid individually. Instead, all of the revenue goes to the community.[3] Incorporated under the names Rifton Equipment, Community Playthings, and Danthonia Designs, Bruderhof factories produce learning devices for disabled students, toys, furniture, and signs.[4]

Kovel argues that the Bruderhof prove there is no contradiction between industrial technology and ecological living. The factories use advanced computers, the communities keep in touch with other over the phone, and they even own a small aircraft fleet. Nonetheless, they consume very little, and "if we could somehow figure out a way to get all the people of the industrialized nations to live so lightly on the earth, there would be no crisis of anywhere near the present scale to worry about."[5]