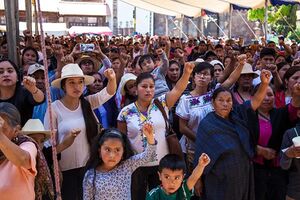 In 2011, the P'urhépecha town of Cherán (in Mexico) kicked out police, politicians, cartels, and unauthorized loggers. Since then, residents have horizontally self-governed while protecting their community and forest based on the principle of kuájpekurhikua, meaning "taking care of the territory."[1]

The ongoing uprising aims to revitalize P'urhépecha traditions and language[2] and to empower all residents including women, youth, elders, and LGBTQ individuals. In 2015, a Women's Council and Youth Council were incorporated into the communal government.

In its own words, the Women's Council aims to improve "the quality of life for the women of Cherán and their families. To reduce inequality, gender-based violence, sex discrimination, and for full integration into the community." The council organizes lectures, workshops, and gatherings. In 2018, it established the Women's House which, according to María de la Luz, seeks "to recover the wisdom of the grandmothers and work with traditional medicine. We have an organic garden and soon will form a women's cooperative."[3]

The Youth Council organizes cultural spaces and events as well as school workshops on topics including literature, rap, and preventing addiction. It also works together with the town's 3 youth-run media projects: Radio Fogata, TV Cherán, and Fogata Kejtsitani.[4]

The Council of the Elders is a sort of moral authority for the town. They keep alive the memory of communal traditions and revolutionary values. They also offer advice to the councils and assemblies. The council has to include at least one woman from each of Cherán's four neighborhoods.

Various residents remembers told Scott Campbell that the LGBTQ community "is viewed as an integral part of Cherán and has had members named to positions in the government."[5]

Decisions are made by consensus at the block, neighborhood, and community assemblies. Councils don't have decision-making power but administer the decisions made at assemblies.

At the most local level, there's the block assembly called a bonfire even though there's no longer a physical fire. During 2011's rebellion, residents of each block gathered around the nightly bonfire and made group decisions. These blocks still maintain regular assemblies which make decisions by consensus Once a week, members of the different blocks gather for their neighborhood assembly. Each of Cherán's four neighborhoods has a neighborhood assembly.

Occasionally, one of the neighborhoods or the Council of Elders will convene a community assembly to make decisions involving the entire town.

Every three years, the assemblies elect members to the town's councils. Council members can be removed at any time, and they can't be reelected after their term is over. Cherán's councils, which operate by consensus, include the following:

The councils establish committees to help implement projects. Altogether, the town has about three hundred government posts. They are paid very little, and the Council of Elders are by far the state of Michoacán's lowest-paid government officials.

Mexico's political parties are banned from the town and are not a part of local politics.[6]

Most of the town's income comes from relatives who have migrated elsewhere, mainly to the United States. The town also accepts some funding from the Mexican government. Residents insist that they won't take the money if there are unacceptable conditions attacked, but still there is a desire to ultimately stop relying on state money at all.[7]

Cherán residents have implemented one of Mexico's most advanced recycling programs. have built perhaps Mexico's most impressive greenhouse. With help from the greenhouse, they've reforested half of the community's deforested land. Community patrols confiscate chainsaws from unauthorized loggers and make sure farmers aren't commercially growing water-intensive avocado trees.[8]

The Honor and Justice Council oversees a community patrol of about 100 people in addition to Forest Protection units. Members are rotating, inclusive of all genders, and determined by neighborhood assemblies. Campbell reports that so-called "anti-communal conduct" is typically resolved with "mediation, repayment for damages, community service, or referral for rehabilitation or psychological treatment." The patrols are not "viewed as a law enforcement formation, but rather as organized members of the community, selected and held accountable by the community, working to maintain the security reclaimed by the 2011 uprising."[9]

On 15 April 2011, women armed with sticks and Moltov cocktails blocked a logging truck and took five loggers hostage. They were sick of the loggers and cartels destroying their communal forests. Townspeople rallied to the women's defense. Police tried to rescue the hostages but left empty-handed after clashes. The next day, residents built barricades and established checkpoints at each of the town's five entrances. The spontaneously horizontal decision-making structure during the uprising would be maintained and improved in subsequent years.