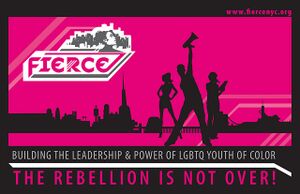 Even in our patriarchal society, in which everyone is conditioned to believe that patriarchy is natural, there has always been resistance. Much current resistance by queer people and transgender people takes a horizontal form. One organization in New York City, called FIERCE!, includes a wide spectrum of people excluded and oppressed by patriarchy: transgender, lesbian, gay, bisexual, two-spirit (an honored category in many Native American societies for people who are not identified as strictly men or women), queer, and questioning (people who have not made up their minds about their sexuality or gender identity, or who do not feel comfortable in any category). FIERCE! was founded in 2000, mostly by youth of color, and with anarchist participation. They uphold a horizontal ethic of “organizing by us, for us,” and they actively link resistance to patriarchy, transphobia, and homophobia with resistance to capitalism and racism. Their actions have included protesting police brutality against transgender and queer youth; education through documentary films, zines, and the internet; and organizing for fair healthcare and against gentrification, particularly where the latter threatens to destroy important cultural and social spaces for queer youth.

At the time of this writing they are particularly active in a campaign to stop the gentrification of the Christopher Street Pier, which has been one of the only safe public spaces for homeless and low-income queer youth of color to meet and build community. Since 2001, the city has been trying to develop the Pier, and police harassment and arrests have multiplied. The FIERCE! campaign has helped provide a rallying point for those who want to save the space, and changed the public debate so that other voices are heard besides those of the government and business owners. Our society’s attitudes about gender and sexuality have changed radically in the past centuries, largely because of groups like this taking direct action to create what is said to be impossible.