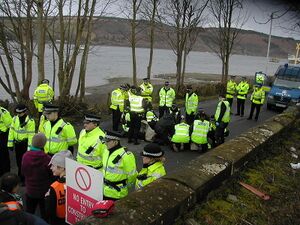 Police dismantling a blockade of protesters from York at the South gate of the Faslane base. Source: https://en.wikipedia.org/wiki/Faslane_Peace_Camp

One such attempt is the Faslane Peace Camp, a land occupation outside Scotland’s Faslane Naval Base, which houses Trident nuclear missiles. The Peace Camp is a popular expression of the desire for a peaceful society, organized on anarchist and socialist lines. Faslane Peace Camp has been continuously occupied since June 1982 and is now well established, with hot water and bathroom facilities, a communal kitchen and living room, and 12 caravans housing permanent residents and space for visitors. The Peace Camp serves as a base area for protests in which people block the roads, shut down the gates, and even penetrate the base itself to carry out sabotage. Galvanized by the Peace Camp, there is widespread popular opposition to the naval base, and some of Scotland’s political parties have called for the base to be closed down.