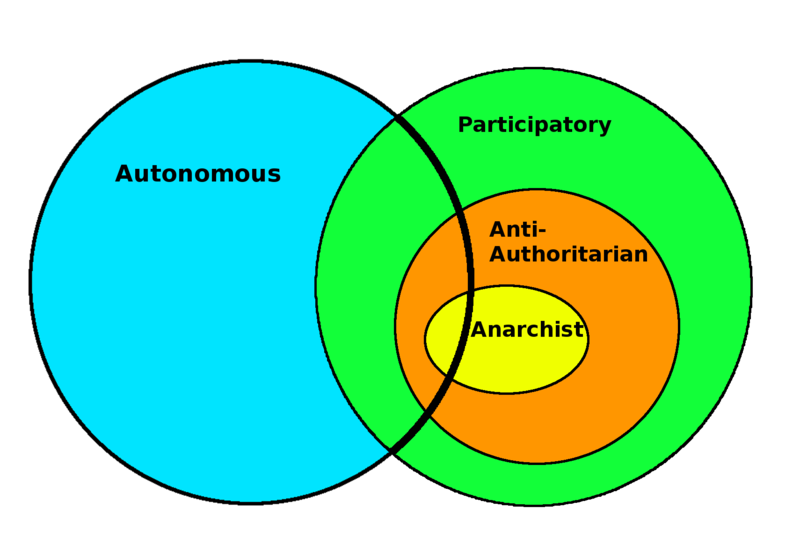 Types of anarchy. Anarchism refers to a political theory and practice that arose in the 19th century, aimed at abolishing coercive hierarchy. Anti-authoritarianism (also known as libertarianism, libertarian socialism, or small-a anarchism) refers to a broader category of politics including Anarchists but also groups such as the Wobblies and Zapatistas that eliminate coercive hierarchy in their practice and in the world they're trying to build. None of the Anarchist or anti-authoritarian experiments in our study have fully succeeded in abolishing coercive hierarchy; what makes them anti-authoritarian according to our definition is their attempt to extend anarchy to everyone, through horizontal means. Third, a participatory category includes examples such as the classical Athenian polis where anarchy is extended to many but not to all or even necessarily to most of society. Participatory politics encompasses anti-authoritarianism, which encompasses Anarchism. Finally, the autonomous category refers to self-governed entities that have liberatory features but fall short of fully participatory decision-making, such as the Paris Commune. For further elaboration, please see the Definitions page.

You cannot overwrite this file.

This file contains additional information, probably added from the digital camera or scanner used to create or digitize it.

If the file has been modified from its original state, some details may not fully reflect the modified file.