Difference between revisions of "Gray wolf"

From Anarchy in Action 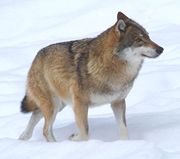 "In today’s world, wolves still experience the joys that come from sharing. Maybe that’s why governments pay bounties to the killers of wolves." -Freddy Perlman[1]

The gray wolf (Canis lupus), commonly known as wolf, practices mutual aid and has a mostly non-coercive social organization, defying popular conceptions of there being a rigid pack hierarchy. Wolves are playful with each other and with many other species. Their presence in ecosystems helps the ecological richness and diversity and carbon sequestration.

In the wild, a wolf pack is generally a family with parents at the lead and offspring following. As early as nine months old, pups leave to start their own packs. Occasionally a pack may adopt an outside pup or a new parent to replace one who has died. Undermining conceptions of rigid wolf pack hierarchies, wolves tend to have a non-coercive social structures.

The biologist and ecologist L. David Mech, who observed wolves in the field for 13 summers and reviewed scientific literature, disputes the mainstream idea that the parents are coercive "alpha" leaders: "The point here is not so much the terminology but what the terminology falsely implies: a rigid, force-based dominance hierarchy." According to Mech, research showing wolf hierarchy tends to come not from the field but from wolves in captivity who are forced to stay together longer than they normally would.[3]

The nature writer Barry Lopez claims that wild wolves have a consensual rather than coercive structure. He writes:

"But the term alpha - evolved to describe captive animals - is still misleading. Alpha animals do not always lead the hunt, break trail in snow, or eat before the others do. An alpha animal may be alpha only at certain times, and it should be noted, is alpha at the deference of the other wolves in the pack. The wolf is a social animal; it depends for its survival on cooperation, not strife...The social structure of a wolf pack is dynamic - subject to change, especially during the breeding season - and may be completely reversed during periods of play. [4]

female tending young pups. On 26 June 1990, I observed the breeding male walk toward the female in the den "excitedly wagging his tail and body." Similarly, on 18 May 1990 in Denali Park, Alaska, I observed radio-collared breeding male 251 in the Headquarters Pack (Mech et al. 1998) approach breeding female 307 when she was in a den with pups and begin to "wiggle walk," waving his back end and tail like a subordinate approaching a dominant. The female emerged from the den and the male then regurgitated to her. These were the only times I have ever seen a breeding male act submissively toward any other wolf, and it seems to indicate that the breeding female is temporarily dominant to even the breeding male before the pups emerge from the den. [7]

A wolf pack will commonly punish an alpha leader who was dominant or abusive. They will temporarily make him the "omega" wolf who has to trail the pack at a distance for a while before being re-integrated into the pack.[8]

Psychologists Friederike Range and Zsófia Virányi found that in contrast to dogs, captive wolves cooperate extensively and do not create rigid hierarchies. Range says wolves "are very cooperative with each other, and when they have a disagreement or must make a group decision, they have a lot of communication or ‘talk’ first".[9]

Wolves are profoundly social and cooperative animals. In 1576, a hunter observed, "If the pups chance to meet their sire or dam anytime after leave the pack they will fawn upon them and seem in their kind greatly to rejoice."[10]

It is well known, in fact, that wolves gather in packs for hunting, and Tschudi left an excellent description of how they draw up in a half-circle, surround a cow which is grazing on a mountain slope, and then, suddenly appearing with a loud barking, make it roll in the abyss. Audubon, in the thirties, also saw the Labrador wolves hunting in packs, and one pack following a man to his cabin, and killing the dogs. During severe winters the packs of wolves grow so numerous as to become a danger for human settlements, as was the case in France some five-and-forty years ago. In the Russian Steppes they never attack the horses otherwise than in packs; and yet they have to sustain bitter fights, during which the horses (according to Kohl's testimony) sometimes assume offensive warfare, and in such cases, if the wolves do not retreat promptly, they run the risk of being surrounded by the horses and killed by their hoofs.[11]

From puphood to adulthood, wolves play games with and pranks on each other. Barry Lopez describes some of their antics:

Even as adults, wolves play tag with each other or romp with the pups....They scare each other by pouncing on sleeping wolves and by jumping in fornt of one another from hiding places. They bring things to each other, especially bits of food. They prance and parade with sticks or stones in their mouth.[12]

Wolves' well-known howling and scent-marking are also social activities. They howl to assemble the pack and to locate each other. The howl can carry as many as six miles.[13] Wolves urinate to leave scent marks that are popularly though to mark territory to outsiders. Primarily, these scent marks are actually meant to tell the rest of the pack, especially the younger pups, where each other are.[14]

Wolves contribute to ecosystemic stability and have a playful relationship with several other species. Research by William J. Ripple and Robert L. Beschta indicates that wolves' predation of ungulates (including moose, sheep, antelope, bison, mule and elk) protects Yellowstone's biodiversity. Since the park reintroduced wolves, elk keep within in a smaller area than they did when they had no fear of wolf predation. As a result, the ungulates eat less aspen, cottonwood and willow, allowing for the recovery of wetland diversity and beaver populations. [15]

Researchers estimate that restoring the wolf population of North America, by restricting the movement of herbivores who eat carbon-sequestering plants, would lead to the annual sequestration of as much carbon 30 to 70 million cars emit.[16]

Wolves have a playful relationship with ravens, who follow wolf packs in order to eat the remnants of the wolves' food. Mech explains how the two species interact:

The birds would dive at a wolf's head or tail and the wolf would duck and then leap at them. Sometimes the ravens chased the wolves, flying just above their heads, and once, a raven waddled to a resting wolf, pecked at its tail, and jumped aside as the wolf snapped at it. When the wolf retaliated by stalking the raven, the bird allowed it within a foot before arising. Then it landed a few feet beyond the wolf, and repeated the prank.[17]

Residents in and around Juneau, Alaska report that, starting in 2003, a wild wolf, who they named Romeo, would repeatedly visit to play with domesticated dogs. The neighbors became comfortable letting their dogs play with the wolf. These playful interactions continued for six years until Romeo's death.[18]

In 2013, a photographer in Finland photographed a wolf and a brown bear who shared food and hung out together for at least ten days. Other bears welcomed the wolf.[19]

For many thousands of years, the indigenous Crow, Shoshone, Bannock and Nez Pearce peoples coexisted with the wolves in what would become Wyoming, Montana and Idaho of the United States. In establishing Yellowstone National Park, the US government violently cleared indigenous people from much of their traditional land. [20] The government did not ban wolf hunting in Yellowstone, and by 1926 hunters and government-run predator control programs had wiped out Yellowstone's entire wolf population. In 1995, the US re-introduced wolves into Yellowstone. Although the 1973 Endangered Species Act has protected wolves to some degree, the Obama administration decided to allow wolf hunting in the areas surrounding Yellowstone. As a result, 14 of the park's wolves (12 percent of the population) had been subsequently trapped or shot as of of October 2013. [21]

In 2013, the anarchist/anti-authoritarian group Earth First! published a "Wolf Hunt Sabotage Manual" with instructions for disrupting wolf hunts. Describing themselves as "hunters and proud of it," the anonymous authors wrote, "But we aren’t proud of what passes for hunting these days and especially for what passes as ‘sportsman’ hunting. Somehow, the National Rifle Association, yuppie trophy hunters, cattle barons, and the Obama Administration are in cahoots in an effort that promises to wipe wolves clean off the planet. And in that case, we choose to be saboteurs for the wild." [22]