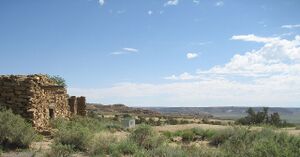 The Hopi are an indigenous, agricultural people in present-day "Arizona" with a tradition of egalitarian power-sharing, gender equality and usufruct. In 1960, there were about 3,500 Hopis, about 300 per village.[1] The Hopi belong to the Pueblo peoples of the southwestern US, and in 1680, the Hopi participated in the Pueblo revolt that successfully drove Spanish colonizers out of Pueblo territory for twelve years. In 1934, the US government imposed on the Hopi a hierarchical governance structure. As of 2017, Peabody Coal's strip mining continues to threaten the land and communities of the Hopi and their Diné neighbors.[2]

The anthropologist Harold Barclay claims, "Hopi of Arizona express an anarchist distrust of leaders, such that that each individual seeks to avoid the leadership role, blending into the group as much as possible."[3]

In summarizing Hopi culture, the Hopi Foundation asserts that gift-giving comprises the "very cornerstone of Hopi society," since it creates a social and spiritual bond between the giver and recipient. The Foundation explains that Hopi ethics prize "peace and goodwill, spiritual knowledge, adherence to religious practices, and responsibility as Earth stewards." The culture also assigns great value to "family cohesion, stability and generosity, humility and respect, a work ethic of self-reliance, and valuing and honoring the needs of the entire community.""[5]

From an outsider's perspective, the Anarchist Murray Bookchin writes, "The traditional society of the Hopi was geared entirely toward group solidarity. Nearly all the basic tasks of the community, from planting to food preparation, were done cooperatively. Together with the adults, children participated in most of these tasks. At every age level, the individual was charged with a sense of responsibility for the community. So all-pervasive were these group attitudes that Hopi children, placed in schools administered by whites, could be persuaded only with the greatest difficulty to keep score in competitive games."[6]

Alice Schlegel writes the Hopi have a "gender ideology ...of female superiority, and it operated within a social actuality of sexual equality."[7] Traditionally, clans were matrilineal, and land-use rights were passed down from mother to daughter.[8] Marriage was monogamous, and divorce was frequent and easy.[9] The father's role in the traditional Hopi family "is something like that of an older comrade and teacher." He taught his sons to farm and herd sheep, and although the son respected his father, "he does not ordinarily fear him".[10] The mother taught her daughters to grind corn, raise children, and construct and repair baskets, pottery and houses.[11]

Traditionally, tribal administrators known as wimmomngwit included a village chief, a crier chief, clan leaders and ceremonial leaders. According to Maria Danuta Glowacka, the wimmomngwi "did not have any legislative or administrative control or positions, nor did they have political power within the community. The concept of political power as an institution referring to domination exercised by some individuals and groups over others is alien to the traditional Hopi culture. The Hopis never had centralized political or ceremonial structure. Traditionally, each village was autonomous and determined its social and ceremonial organization according to its own interpretation of clan migration traditions."[12] Households confederated into clans, clans into phatries, phatries into villages and villages into Mesas. There are thirteen villages and three Mesas.[13] Wayne Davis, an anthropologist, writes, "The native system of [Hopi] government is, in effect, a practical form of anarchy." [14]

In 1934, the US held a referendum among the Hopi to decide whether to organize a federally-recognized tribal government. The vast majority of Hopi strongly opposed forming a new government, and 90 percent of eligible voters boycotted the referendum. The referendum passed, and Hopi governance quickly became much more hierarchical. [15]

Traditionally, the Hopi practiced a usufruct system of land-use.[16] Peter Spotswood Dillard describes it as "a form of anarcho-communism". The 1890 Dawes Act imposed private land ownership on the Hopi economy, giving each Hopi family 100 acres. Dillard writes that the Hopi clans "continue to oversee collective ownership of tribal lands".[17] The Hopi are agriculturalists.[18]

Traditional Hopi culture assigns great importance to living at a balance with their land, and there was no notion of dominating nonhuman nature. As a way of protecting wildlife, Hopi hunters would let the first animal they saw escape and would only kill subsequent animals. This practice would prevent over-hunting of threatened species.[19]

According to Jude Todd, "The Hopi have an acute awareness of humankind's interrelationship with the rest of nature, including not only plants and animals, but also such seemingly inanimate entities as stones and faraway planets and stars....Control, mastery, dominance of nature is foreign to the Hopi ethos. It can be said that they work with and within nature, but not in any way that sets them apart from or in opposition to it, as the notion of control must." The Hopi name their clans after nonhuman entities like the sun, corn, bears and spiders. Traditional rituals line up with the seasons and other natural phenomena like rain. For example, the Snake Dance aims to balance the forces of nature so that rain comes.[20]

Bookchin notes that traditional Hopi horticultural ceremonies attempt to summon cycles like solstices and the germination of maize. According to traditional beliefs, people "play a complementary role in natural cycles: they facilitate the workings of the cosmic order."[21]

After the 1934 Hopi government reorganization, the new government became dominated by assimilated members of society, who frequently were Mormon converts. The tribal government agreed to lease much of their land for mining coal, oil and methane gas. Strip mining of coal has required the mass dispossession of Diné (Navajo) sheep herders living on land the US government considers property of the Hopi.[22] Some Hopi, particularly traditionally-minded members, strongly oppose strip mining. In 1971, six Hopi elders wrote in a statement supporting a lawsuit against the strip-mining Peabody Coal Company, "The area we call 'Tukunavi' [which includes Black Mesa] is part of the heart of our Mother Earth...The land is sacred and if the land is abused, the sacredness of Hopi life will disappear and all other life as well".[23] In 1979, the traditional Hopi leaders David Monongye and Thomas Banyacya attended and supported the American Indian Movement's Fifth International Treaty Council summit protesting the displacement of Diné herders due to strip mining.[24]

"Violence is rare among the Hopi," wrote anthropologist Fred Eggan in 1960. Although the War Chief of the village traditionally had responsibility for keeping the peace, he had "no punitive powers."[25]

As a way of deescalating conflict, Hopi perform a clown skit that mocks the parties involved. Peter Gelderloos elaborates:

Factions still exist within Hopi villages, but they overcome conflict through cooperation in rituals, and they use shame and leveling mechanisms with people who are boastful or domineering. When disputes get out of hand, they use ritual clown skits at kachina dances to mock the people involved. The Hopi offer an example of a society that gave up feuding and developed rituals to cultivate a more peaceful disposition.[26] The image of clowns and dances being used to solve disputes gives a tantalizing glimpse of humor and art as means for responding to common problems. There is a world of possibilities more interesting than general assemblies or mediation processes! Artistic conflict resolution encourages new ways of looking at problems, and subverts the possibility of permanent mediators or meeting facilitators gaining power by monopolizing the role of arbiter.[27]

The Hopi participated in the 1680 decentralized Pueblo revolt that drove Spanish colonizers out of Pueblo territory until 1692. The Tewa Pueblo medicine man Popé had spent five years building alliances across the Pueblo towns that had never before united in warfare. By 1680, his vision of a pan-Pueblo confederation materialized, as Indians blamed devastating drought and disease on the brutal Spanish colonizers' ban on indigenous religious rituals. The alliance united some seventeen thousand Pubelos who resided in over twenty-four towns and spoke at least six languages. Lacking--or perhaps forgoing--the militaristic discipline of the Spanish, Pueblo warriors organized a decentralized resistance, coordinated by messengers running from town to town with strings of knots representing the number of days until the revolt. Rising up in August, the Pueblo militants captured Santa Fe and cut off settlers' water supply. After nine days, the Spanish retreated southward, “[b]ewildered by the scale and success of the uprising.”[28]

When Popé took power, however, he erred by establishing centralized authority over the formerly autonomous Pueblo towns. The historian Robert Silverberg calls this centralization “the most alien concept [the Spanish] had brought”.[29] As the Pueblo governor, Popé moved into the Spanish governor's former palace. He enslaved Pueblos who had refused to join his rebellion, and he enslaved Pueblos who disobeyed him. Popé banned Christian rituals with a fervor rivalling the Spaniards' persecution of indigenous rituals. As drought and disease persisted, the Pueblo population quickly grew disenchanted with the new regime. “To some it seemed that things had been under the Spaniards,” Silverberg writes.[30] One of those Pueblos was named Juan. A twenty-eight year-old, he provided a confession of sorts to Spanish priests in 1681. He complained that Popé banned Christianity, and he said that many Pueblos felt the Spanish “must come and gain the kingdom” of New Mexico.[31]

When the Spanish finally did reconquer the territory in 1692, they encountered very little resistance. As a ruler, Popé had destroyed the fragile confederation he had previously helped establish among the Pueblos.