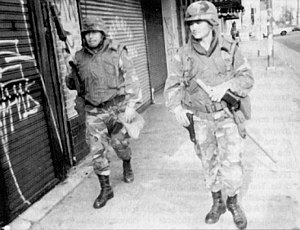 For five days from April to May of 1992, tens of thousand of people rose up in Los Angeles and got a taste of freedom. They responded to the police's brutal killing of black motorist Rodney King and the subsequent acquittal of the officers who beat him. In an article for Race Traitor, the Chicago Surrealist Group assessed that the events constituted a full rebellion, not merely a "riot":

The ruling-class delusions of grandeur that followed the collapse of the state-capitalist bureaucracies in eastern Europe and the USSR--delusions already interrupted by a steadily worsening recession as well as mounting revulsion against U.S. government corruption and malevolence at home and abroad--burst like a bubble as the unemployed, the homeless and the hip-hoppers of L.A. started reinventing the revolutionary traditions of May Day a couple days early.[1]

On 3 March 1991, Los Angeles police had chased black motorist Rodney King for ten minutes before he stopped and got out of his car. Three officers proceeded to tase King, kick him in the head, and club him fifty-six times, with Sergeant Stacey Koon giving orders and other officers watching. In a video of the incident captured by a bystander, an officer can be heard calling King a "n***". While King was hospitalized, nurses reported hearing police brag about the beating. Four officers were indicted, and all were acquitted.[2]

On 26 April, three days before the 29 April acquittals, the Bloods and the Crips- two major gangs of Los Angeles- agreed to a truce. This truce set the stage for a major uprising.[3]

At news of the four officers' acquittal, Los Angeles residents rose in a rebellion that cost the city nearly $1 billion in property damage. During the uprising, police arrested 3,492 latin@s, 2,832 black people, 640 white people, and 2,492 people of unidentified races. Most were arrested for breaking curfew and property damage[4], and the rebels' main targets were police stations, government buildings, and "businesses regarded as symbols of the dominant order."[5]

A strong element of joy ran through the uprising. Asked by reporters why they were looting, rebels answered, "Because it's fun!" The Chicago Tribune ran a photo with the caption "Looters laugh while they carry away all they can."[6] Women "played leading roles in the streets," reports the Chicago Surrealist Group in an article originally published in the journal Race Traitor.[7]

The Chicago Surrealists claimed the rebels, with their demand for a life beyond mere survival, had "strong affinities with the most radical 'no-compromise' wing of the environmental movement"[8]:

The fact that the Black teenagers increasingly recognize themselves as an endangered species--this was in fact the theme of one of the most popular local rap recordings just before and during the rebellion--is surely one of the major revolutions of consciousness of our time. Equally suggestive, in this regard, is the fact that the planting of new tees--to bring beauty to L.A.'s non-white communities--is a major demand in the program put forth by the Bloods and Crips for the reconstruction of the city.[9]

The riots inspired a lot of politically-minded gangster rap and music in other genres, as documented by Crimethinc. Some of the classic songs included Ice-T and Slayer's collaborative covers of The Exploited, Kam's "Peace Treaty," Dr. Dre's "The Day the Niggaz Took Over," and Sublime's "April 29".[10]

The death toll "definitely attributable to the rioters was under twenty. The police killed at least half that many, and probably many more . . . Moreover, although some whites and Korean Americans were killed, the vast majority of fatalities were African Americans and Hispanic Americans who died as bystanders or as rioters opposing civil authorities."[11]

People who find themselves in a cop-free environment for the first time, conscious that they are freer than they have ever been in their lives, cannot be expected to be exemplars of free human beings in a free society. For, into their first tentative experience of freedom they bring with them a lifetime's accumulation of unfreedom. It would be absurd to believe that those who have been bound their whole lives will, at the moment their fetters are suddenly and unexpectedly shaken off, immediately move with a dancer's grace. No, they will not always do the right thing, and some will inevitably commit terrible wrongs. That excesses are a part of every rising of the oppressed is a truism--the American Revolution of 1776 was full of excesses--and only lickspittles of the status quo could denounce such uprisings because of the excesses of a few.[12]