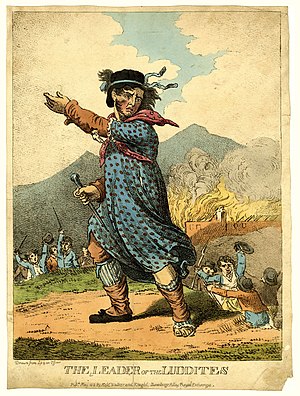 The Luddites were English cotton workers and others who, in the 1810s, destroyed livelihood-threatening weaving machines. They were active in Lancashire, Nottinghamshire, and Yorkshire. Contrary to stereotypes, the Luddites had a "high degree of organisation," popular backing, and sophisticated politics.[1] The historian E.P. Thompson describes Luddism as "a violent eruption of feeling against unrestrained industrial capitalism."[2]

The Luddites' first major actions were riots in Nottingham in March of 1811, where they broke sixty stocking frames (mechanical knitting machines).[3] By early November, the Luddites attacked in small bands, wearing masks and using a pistol fire as a signal to retreat. Thompson reports, "Every attack revealed planning and method."[4] In January, 1812, workers in Yorkshire began imitating the Luddism of Nottingham. They set a gig-mill on fire, and by February, there were nightly attacks in some districts.[5]

The Luddites' insurrections scared authorities, and Vice-Lieutenant Wood wrote on 17 June 1812, "[E]xcept for the very spots which were occupied by soldiers, the country was virtually in the possession of the lawless."[6]

According to Thompson, the Luddites "had the backing of public opinion" in the Midlands and West Riding,[7] in some regions, and historian Eric Hobsbawm remarks that there was "overwhelming sympathy for machine breakers in all parts of the population."[8]

The Luddites were highly coordinated yet decentralized. John Zerzan and Paula Zerzan explain, "Eschewing an alienating structure, their organization was without a center and existed largely as an 'unspoken code;' theirs was a non-manipulative, community organization which trusted itself."[9] Scholars today agree the movement's alleged commander King Ludd was fictional and perhaps based on the apprentice weaver Ned Ludd who smashed a loom in protest of a master who had beaten him.[10]

The main reason for the Luddites' demise was state repression. A Libcom article describes "the destruction of the Luddites by the State."[11] Zerzan and Zerzan argue that the the Luddites' "leadership," however restricted in its initial influence, ultimately pushed the struggle into tamer legislative, reformist efforts.[12]