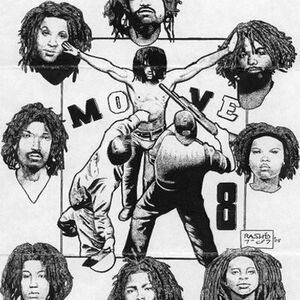 Founded in 1972 in Philadelphia by John Africa, MOVE is an anti-authoritarian collective that advocates Black liberation, armed self-defense, animal and Earth liberation, and a back-to-nature lifestyle. Living communally, the group has Black, Latinx, and white members. Members take the surname Africa. In 1985, police bombed MOVE's house, starting a fire that killed 11 people and destroyed 65 houses in western Philadelphia. The group's name, not an acronym, "means exactly what it says: MOVE, work, generate, be active."[1]

“MOVE‘s work is to stop industry from poisoning the air, the water, the soil, and to put an end to the enslavement of life – people, animals, any form of life. the purpose of John Africa’s revolution is to show people through John Africa’s teaching, the truth – that this system is the cause of all their problems (alcoholism, drug addiction, unemployment, wife abuse, child pornography, every problem in the world) and to set the example of revolution for people to follow when they realize how they’ve been oppressed, repressed, duped, tricked by this system, this government and see the need to rid themselves of this cancerous system as MOVE does."[2]

One of MOVE's present-day priorities is freeing Black Panther Party prisoner Mumia Abu-Jamal. You can help learn more at their website.[3]

MOVE has strong anti-authoritarian tendencies that parallel green Anarchism. In 1978, the Washington Post referred to MOVE as "anarchist."[4] The group has not self-identified as Anarchist, but their ideology and structure have at least a strong overlap with green Anarchism. MOVE declares themselves to be uncompromisingly opposed to "the government, the military, industry and big business." And they also declare themselves as uncompromisingly in defense of all forms of life: "We love all life. It is tremendously upsetting for us to see someone mistreat an animal and we will take immediate action to stop anyone from beating a dog, throwing stones at birds, or causing similar impositions on innocent life."[5]

Although the founder John Africa created much of MOVE's philosophy and strategy, the group's website asserts that Africa "is not our leader. JOHN AFRICA has equipped each of us with the wisdom, strength, and understanding to lead ourselves."[6] According to the group's member Jerry Africa, MOVE makes decisions by consensus.[7]

Despite its anti-authoritarian leanings, MOVE followed the teachings of John Africa so closely that one study refers to him the group's "patriarch."[8] MOVE's website may be interpreted as implying that "natural law" prefers heterosexual, monogamous relationships: "While we do not heed the system’s legal institution of marriage, we do adhere to the natural law that requires one male and one female to mate and produce new life. We are monogamous."[9]

Police clashed with MOVE throughout the group's early existence. "Given [Mayor] Rizzo's iron-fist rule, confrontation with MOVE was inevitable. Infamous for his racist brutality as Police Commissioner from 1968-71, Rizzo once publicly boasted that his police force would be so repressive that he'd 'make Attila the Hun look like a faggot.' He was elected mayor in 1972, with campaign slogans like 'Vote White.'"[12] In 1974, police beat and jailed two female MOVE members, causing them to miscarry. In 1976, as family greeted seven MOVE members being released from prison, police descended on the crowd and stomped three-week old Life Africa to death.[13]

In 1978, Philadelphia's Mayor Frank Rizzo blockaded four blocks surrounding the MOVE house for two months, preventing food and water from reaching the group's house. Police arrested and beat neighbors who tried to deliver food and water to the house. Eventually, the sides reached an agreement under which MOVE members would move out of the house.

On 8 August, accusing MOVE of not leaving fast enough, hundreds of riot police seized the house and used bulldozers, cranes and high-pressure hoses to force the residents out of the basement where they hid. Gunshots were fired, "likely from a house across the street,"[14] and police responded with 2,000 rounds of ammunition. Officer James Ramp was killed during the shooting. Police arrested 12 adult MOVE members and beat several others. After the incident, police bulldozed the house, destroying physical evidence of what happened.

In the subsequent trial, the state used questionable evidence to frame and convict the "MOVE 9" of killing Ramp. According to journalist Mumia Abu-Jamal, the MOVE 9 "were convicted of being united, not in crime, but in rebellion against the system and in resistance to the armed assaults of the state. They were convicted of being MOVE members."[15]" MOVE argued that it would have been impossible for them to shoot Ramp since they were busy holding the children and animals up from the seven feet of water from the hoses the police used to flood the basement.[16]

On 13 May 1985, police fired over 100,000 rounds of bullets at MOVE's house and, without giving any warning, bombed the house from the air. Ramona Africa, the only adult survivor of the bombing, says that when MOVE members tried to send the children outside to safety, police responded with a barrage of bullets, forcing the children back inside the burning house. Six adults and five children died. The fire destroyed 65 of the neighborhood's houses.[17]

The nine MOVE members arrested in 1978 have been referred to as the MOVE 9. The surviving members were finally released between 2018 and 2019.[18]

MOVE supporter Mumia Abu-Jamal, a journalist who belonged to the Black Panther Party is still in prison and is being supported by MOVE.[19]