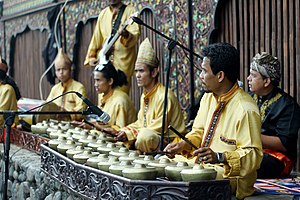 The Minangkabau are a matriarchal, stateless, and egalitarian people living in modern-day Indonesia.

The Minangkabau traditionally followed a law called adat, and today most Minangkabau combine adat with an adherence to Islam. Through the adat traditions, Minangkabau are matrilineal, and women have central roles in ceremonies and land ownership.[1]

The Minangkabau have matrilocal residency and practice "visiting marriage" (similar to the "walking marriage" of the Mosuo), meaning that the alternates between living with his biological family and visiting his wife's family as a regular guest. Traditionally, 40 to 80 people from 3 generations would live in a large "motherhouse" which had room for assemblies and festivals. Because upkeep for this large building is expensive, many Minangkabau today live in smaller dwellings.[2]

Each community is a "self-governing village republic," and women have as much power as men do.[3] If anything, "Minang women have the upper hand in daily decisions involving household running – they decide on the budgeting, shopping, and kids’ education," according to field researcher Sadiq Bhanbhro. It's true that men tend to have the more public leadership roles, but these roles are often as figureheads: "Yes, men have public power. But think of them as front men, representing the community to the state or to the mosque,” said Evelyn Blackwood an anthropologist who published ethnography on Minangkabau."[4] Heide Gottner-Abendroth assesses that while men make grand speeches in the village council, "These speeches have the character of rote performances, where everyone is in agreement before they start."[5]

The Minangkabau practice a gift economy, where basic needs are in the hands of the women who pass it on to their daughters.[6]

The Minangkabau economic is agricultural, and their staple foods include rice, bananas, coconuts, and hot peppers.[7]