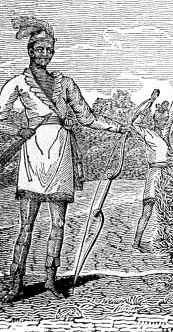 From 1817 to 1818, Colonel Andrew Jackson led a coalition of Creek and United States troops to invade Florida in order to recapture runaway slaves being sheltered by the Seminoles. Although Indian and Black Seminoles sided with the Spanish and fought back against Jackson's troops, the invasion weakened Spain's hold on the territory. After the war, Spain agreed to sell Florida to the US for $5 million. The US annexed Florida in 1821.[14]

When the US tried to relocate the Seminoles to the “Indian Territory” of Oklahoma, many Seminoles resisted and full-scale war broke out between the US and the Seminoles in 1835. Over the course of the war, the US spent over $40 million (according to William Loren Katz) and lost 1,500 soldiers.[15] While the US had 50,000 soldiers fight in the war and never had fewer than 3,800 soldiers in the field, the Seminoles had a total of just 1,500 warriors.[16] Using guerrilla warfare tactics, the Seminoles prevented the US from outright winning the war. The Seminoles were not entirely dislodged from Florida, and some remain there to this day. Moreover, the US was not able to re-enslave the Black Seminoles; the fighting continued until the Blacks were allowed to migrate westward rather than be returned to the plantations.[17]

The Seminoles' military leader Osceola delivered this address to many Seminoles at an assembly at Silver Springs on 23 October 1834. Over the course of the next year, there were minor clashes between Seminoles and whites, but in late fall of 1835, Seminoles convened a major assembly in the town of Big Swamp and Long Swamp, where the men voted to declare war rather than migrate westward. In the war's first battle, 80 Seminoles captured a train of the Florida militia and killed 8 militiamen on 18 December 1835.[19]