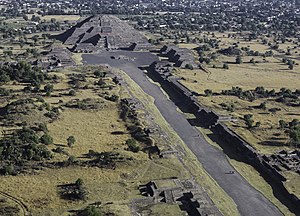 Teotihuacan was an ancient city in the Valley of Mexico from around 100 BCE to 600 CE, with an estimated population of 100,000 people. Although Teotihuacan began as a highly stratified society, major changes occurred around 300 CE. The Temple of the Feathered Serpent was desecrated and partially destroyed. Residents permanently ended new pyramid construction and ritual sacrifice of city residents. Resources were directed toward construction of comfortable apartment complexes for the vast majority of the city's populace. The city's artwork from this later period portrayed people as being roughly the same size and at the same level, with no depictions of rulers. According to David Graeber and David Wengrow, "The general consensus among those who know the site best is that Teotihuacan was, in fact, a city organized along some sort of self-consciously egalitarian lines."[1]

Although Teotihuacan became less hierarchical, it did not become fully egalitarian and peaceful. Although the mere existence of the apartment complexes is remarkable, the fact is that they "range in quality from spacious, even palatial, homes to crowded and more slumlike quarters."[3] And although sacrificing city residents stopped, the sacrifice of war captives continued in the neighborhood of Teopancazco. The city's internal tensions were apparently responsible for the city's disintegration.[4]