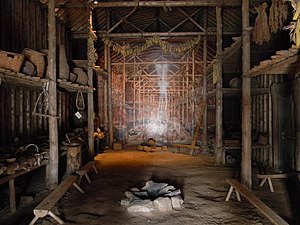 The Wendat (sometimes known as Huron) are a confederacy of Iroquoian peoples who united on the land of Ouendake[1] around the Great Lakes of Turtle Island (North America). By 1400 CE, the Attignawantans, Attigneenongnahacs, and Arendarhonons belonged to the confederacy, and the Tahontaenrats and Ataronchronons joined around 1500 CE.[2] Delegates from the Wendat peoples reestablished the Wendat Confederacy in 1999.[3] The traditional Wendat social structure is egalitarian and arguably matriarchal.

In 1644, Father Lallemant wrote of the Wendat:

"I do not believe that there is any people on earth freer than they, and less able to allow the subjection of their wills to any power whatever - so much so that Fathers here have no control over their children, or Captains over their subjects, or the Laws of the country over any of them, except in so far as each is pleased to submit to them."[4]

Seventeenth-century French diplomat Louis Armand de Lom d'Acre Baron de Lahontan used the word "anarchy" to describe Wendat society. He recalled that a Wendat explained to him, "We are born free and united brothers, each as much a great lord as the other, while you are all the slaves of one sole man. I am the master of my body. I dispose of myself, I do what I wish, I am the first and the last of my Nation...subject only to the great spirit."[5]

The Wendat had a matrilineal and matrilocal society, in which the husband moved in to live with his wife's family. According to anthropologist Jennifer Birch, "Men's roles "did not eclipse women's power in the community."[6]

Each town had five or six families, and each family lived in a longhouse run by a council of its women. The women controlled the longhouse's clothing, tools, and food.[7]

"First, don't you think we are aware of a creative power in teh universe, styled the 'Great Spirit,' or the 'Master of Life,' an unbounded spirit that we believe to be in everything? Second, we avow the immortality of spirits. Third, the 'Great Spirit' endowed us with minds as capable of telling good from bad as up from down, so that we can, and with precision, figure out sounds rules of justice and wisdom. Fourth, spiritual tranquility pleases the great 'Master of Life," while, on the other hand, spiritual turmoil horrifies it, since trouble twists the human spirit. Fifth, life is a dream, and death, an awakening, after which the spirit sees and knows the nature and quality of everything, visible or invisible. Sixth, our human consciousness cannot stretch more than an inch above everyday concerns. We should not stroke our egos by prying into the mysteries of unseen and improbable things."[8]

Women's councils made decisions at the local level, with no male counterpart. Decisions at the higher levels had a greater gender balance. Men comprised the decision-making councils, but female councils had the power to veto the men's decisions.[9]

Although the all-male decision-making councils may give the impression of patrarichal authority, the Anarchist writer Elisée Reclus explains that the relations were more balanced and, if anything, favorable to the women. "Among the Wyandots of North America,[13] the nation's grand council consisted of 44 women and 4 men, who were really only the executive agents of the female will."[10]

There was no private property or class stratification.[11]

Father Lallemant in the seventeeth century was horrified that the Wendat did not punish criminals. However, he noted that the Wendat system of criminal justice was effective. Graeber and Wengrow summarize, "Rather than punish culrprits, the Wendat insisted the culprit's entire lineage or clan pay compensation. This made it everyone's responsibility to keep their kindred under control."[12]