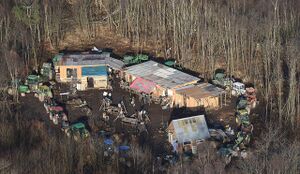 Established in 2009, the Zone to Defend (ZAD, or Zone a Défendre) is a French blockade movement that, by 2018, successfully stopped construction of the proposed Grand Ouest Airport in Notre-Dame-des-Landes, near the city of Nantes. Resistance in the region had occurred since the airport was proposed in 1972, and the first building occupation in the area occurred in 2007. The ZAD was declared in 2009, coming out of a "climate action camp."[1] While defending themselves from evictions, participants formed "an autonomous region based on community, mutual aid, and anti-capitalism. The residents developed infrastructure to feed and house themselves and host large events that inform and educate the public about their struggle and successes." On 17 January 2018, French officials cancelled the airport project, and ZAD declared victory. Still, ZAD decided to continue the occupation, demanding that expropriated residents be allowed to return, that members of the autonomous community be allowed to stay, and that the area's human and nonhuman communities be fully protected. The state began brutally evacuating the ZADists on 9 April 2018.[2] ZADists have committed to remaining in the zone, and updates on the campaign can be found at [zad.nadir.org].

In 2009, activists held a "climate action camp" on the site in response to authorities' renewed interest in building the airport. Hundreds attended the camp, and attendees squatted buildings around the area. They criticized proposed airport's expected damages to local ecosystems, local residents, and the global climate. Construction would require the expropriation of local farmers and other residents. The occupation was born out of this climate camp. They called themselves Zone a Défendre, a play on the government term "Zone d’Aménagement Différé," or "Urban Development Zone." Members made decisions by consensus at general assemblies.[3]

ZAD has been called:

Europe’s largest postcapitalist protest camp – a kind of rural occupy on the eastern edge of Brittany, half and hour’s drive from the city of Nantes. Like a rebel constellation spread across 4000 acres of forest, farmland and marshes, it takes the form of old squatted farms and fields, DIY strawbale houses, upcycled sheds, theatres and bars cobbled from industrial pallets, hobbit like round houses, cute cabins built with the worlds waste, huts perched frighteningly high in trees and a multitude of other disobedient architectural fantasies. La ZAD has been a laboratory for ways of living despite capitalism since the 2009 French Climate Camp. At the camp activists and locals put together a call for people to come and live on the Zone to protect it. Now you can find illegal goat herds and organic bakeries, bike workshops and bee hives, working farms and communal kitchens, a micro brewery, a mobile library, and even a pirate radio station: Radio Klaxon.[4]

On 16 October 2012, the state sent "[m]ore than one thousand police officers, two helicopters, and several armed vehicles" to evict the zone. Activists reoccupied the ZAD a few days later. For days, the police tried to seize permanent control of the zone, and ZADists fought back by building barricades and throwing rocks. Not expecting such determination, the police gave up. In November, thousands of people came to participate in the ZAD. On 22 February 2014, ZADists went on the offensive and held a mass, militant demonstration in the city of Nantes. They built barricades and served meals. They erected a tree house. They spraypainted riot cops using a fire extinguisher. A police station was looted and attacked. The real estate headquarters of VINCI (the contractor the state hired for construction) were looted and destroyed. The total cost of damages were estimated at more than a million euros. The demonstration sent "a clear message to the government."[5]

The government cancelled the airport in January 2018. ZAD declared victory. However, the state soon afterwards announced expansions to several existing airports. Authorities issued an ultimatum to the ZADists, demanding that they immediately clear main roads and that they leave the zone by March's end or else be evacuated. Around this time, radical ZADists escalated complaints that moderate factions had taken informal power within ZAD. According to these critiques, moderates used the general assemblies to push decisions that had really been made at prior, private meetings. Moderates also violated rules of consensus. For example, the D281 road was cleared based on a majority decision rather than on a consensus. Crimethinc argues, "Decision-making processes aside, regardless of what the arguments were for cleaning the road, doing so was like setting down one’s weapons before signing a peace treaty. It was a fatal tactical error."[6]

Police began brutally evicting ZAD on 9 April 2018. ZAD has inspired other occupations across France, including one in Lyon against a football stadium and one at Sivens against a dam.[7]