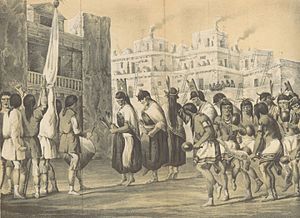 The Zuni people, of what's now the southwestern "United States," have traditionally been an egalitarian society governed communally with the facilitation of non-coercive chiefs. Libertarian Marxist psychologist Erich Fromm described the Zuni as a paradigmatic life-affirming (biophilic) society.[1]

Zuni society is summarized by the Pueblo of Zuni webiste:

"The Zuni people have lived in the American Southwest for thousands of years. Their cultural and religious traditions are rooted, in large part, in the people's deep and close ties to the mountains, river ways, forests, and deserts of this ancient Zuni homeland. Primarily being farmers, the Zuni people raise maize and wheat and engage in Jewelry making. It has become an important additional source of income for the people. Traditional Zuni life is oriented around a matrilineal clan system and a complex ceremonial system base on a belief in the ancestors (ancient ones). There are six specialized esoteric groups, each with restricted membership and its own priesthood, devoted to the worship of a particular group of supernaturals. During the well-known Shalako Festival, held in early winter, dancers representing the couriers of the rain deities come to bless new homes. One way the Zuni people express these cultural traditions is through their art: in painting, pottery, jewelry, and fetish carving, for example. These things have significant meaning, and, to the Zuni, serve to help unite the past with the present. So, on the one hand, Zuni art is a material record of the past."[2]

Similarly to other Pueblo societies such as the Hopi, the Zuni treat men and women equally. The Zuni have been matrilineal[3] and matrilocal, protecting women's status as Howard Zinn reports:

In the Zuni tribes of the Southwest, for instance, extended families- large clans-were based on the woman, whose husband came to live with her family. It was assumed that women owned the houses, and the fields belonged to the clans, and the women had equal rights to what was produced. A woman was more secure, because she was with her own family, and she could divorce the man when she wanted to, keeping their property.[4]

Ruth Benedict explained that the Zuni consider someone a good person if they have "a pleasing address, a yielding disposition and a generous heart." Erich Fromm, summarizes some central themes of Zuni culture:

"[M]aterial things are relatively little valued and [...] the major interest in life is religious. To put it another way, the dominant value is life and living itself, not things and their possessions. Songs, prayers, rituals, and dances are the major and most important elements in the system."[5] [...] There is no sense of sin, especially in connection with sex, and sexual chastity is generally regarded with disfavor. Sex is considered to be an incident in a happy life, but by no means, as in some other rather aggressive societies, the only source of pleasure."[6]

The Zuni have recognized a third gender known as the lhamana who was assigned male at birth and adopted feminine characteristics. The lhamana "dressed as women and performed women’s crafts such as weaving and potting, but also had the physical strength to fulfill certain male-oriented pursuits such as hunting big game and cutting firewood."[7]

H. Bolton wrote in 1909, "In their government, they are free, for although they have petty captains, they obey hem badly and in very few things." E.C. Parsons reported in 1933 that the chiefs merely "first among equals." Based on such accounts, anthropologists that whatever hierarchies existed were "far from the coercive kind."[8]

The means of production - including land, game, plants, fish, tools, and knowledge - were held in common. There was no class stratification, and therefore economic inequalities were not large enough to turn into coercive authority.[9]

"Murder hardly exists; as Benedict reports from her own observation, there is no memory of homicide," explains Fromm. He adds, "there is no evidence that the absence of manifest hostility is due to an intense repression of aggression and hence there is no valid reason to question the picture of an unaggressive, life-loving, cooperative system."[10]