This is a list of working definitions for some of the website's categories of anarchy. Also see the Theory page. 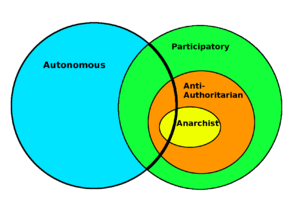 Anarchism refers to a political theory and practice that arose in the 19th century, aimed at abolishing coercive hierarchy and establishing a libertarian socialist society in its place. Anti-authoritarianism (or libertarianism) refers to a broader category of politics including groups such as the Wobblies and Zapatistas that do not necessarily call themselves Anarchists but oppose coercive hierarchy and attempt to implement libertarian socialism.. None of the Anarchist or anti-authoritarian experiments in our study have fully succeeded in abolishing coercive hierarchy; what makes them anti-authoritarian according to our definition is their attempt to extend anarchy to everyone, through horizontal means. The above-mentioned Wobblies and Zapatistas would be the first to admit that significant hierarchies remain in place in their projects despite their best efforts.

In some places, we may adopt the distinction between "big-A" Anarchism and "small-a" anarchism, where the latter includes anti-authoritarian varieties. "Small-a" anarchism, as Silvia Federici writes, "is a principle that is present in every age and country, expressing an irrepressible desire for individual and collective self-determination, of which European anarchism is only one embodiment shaped by specific historical conditions."[1]

Our participatory category includes examples such as the classical Athenian polis where direct democracy is extended to many but not to all or even necessarily to most of society. Significantly, some participatory examples have historically relied on oppressive systems of enslavement and colonialism. These examples may still be useful for the study of how large people groups of people can engage in horizontal self-rule. They may also serve as a warning for how horizontally-organized groups and societies can be exploitative of people who are not members.

The autonomous category refers to self-governed entities that have liberatory features but fall short of fully participatory decision-making, such as the Paris Commune.

Note on colonialism and representation

Part of our goal with this website is to challenge Eurocentric conceptions of anarchy by situating the European-derived practice of Anarchism within a much broader global set of anti-authoritarian, participatory and autonomous practices. Much is missed by ignoring the multitude of anarchies that have existed outside of the Anarchist tradition. There are several dangers, however.

First, we run the risk of misrepresenting non-European groups and/or exploiting them as a means for our preconceived political ends. As Peter Gelderloos puts it, "we could easily fall into the accustomed eurocentric pattern of manipulating and exploiting these other cultures for our own ideological capital." To counteract this tendency, we aim to always quote and cite voices from the groups we study, and we make note of the inevitable biases that European authors carry when they/we write about colonized cultures. Moreover, we acknowledge that many of the non-European cultures we're studying still carry on vital struggles against domination, and we try to provide information on how readers can get involved in solidarity efforts. As Gelderloos writes, " After all, if we are inspired by certain other societies, shouldn’t we do more to recognize and aid their ongoing struggles?" See "The_Tricky_Topic_of_Representation".

A second trap involves our inclusion on this website of "participatory" and "autonomous" examples that practiced and/or practice slavery, sexism, and settler-colonialism. Some could argue that to include classical Athens, the New England town meetings, and the Zionist kibbutzim on this website is to whitewash what they did. We think, however, that their inclusion is extremely important, however, since such examples offer important insights into when anarchy can and cannot work. One of our working theses is that colonial attitudes and practices have been a primary reason for the failure of many of the examples included on this website. As participatory communities face threats of isolation, co-option, and conflict, equality for all tends to be a much more stable position than equality for some. As the Situationists argued, "Those who make revolution half way only dig their own graves."[2]

While we aren't sure of a way around it, we regret that our definitions imply a kind of speciesism, meaning that they exclude or discriminate against nonhuman species. After all, many of our examples of "anti-authoritarianism" and "Anarchism" systematically dominate animals and some destroy ecosystems. A consistently anti-authoritarian or anarchist society, some of us maintain, would need to embrace the liberation of all animals and the Earth. This may well mean a reconsideration of our language, expanding the meaning of anarchy beyond the standard human-centric interpretation.

For reasons which we acknowledge may not be fully satisfactory, this website usually uses the term "anarchy" to refer to the absence of dominating humans. First, nonhuman animals and ecosystems are not entirely capable of self-liberation, a foundational concept in many anti-authoritarian and Anarchist theories. While animals can run away from their captors, they can't theorize and organize sustained revolts against their captivity. This doesn't mean that it's okay for humans to dominate animals, but it does mean that the way we would think about extending anarchy to animals is is qualitatively different from the way we think about extending anarchy to most humans. Second, although many of us may be vegans, vegetarians and "environmentalists" (we're aware of the word's reformist connotations), we are conscious of the fact that these movements are often primarily white, and we want to avoid falling into a trap where of self-righteously putting ourselves in a purist category above, say, indigenous societies who have managed to live fairly sustainably on the Earth for far longer than anyone else has. Here is what Animal Liberation Front militant Rod Coronado said when asked how activists can "build bridges between Indigenous resistance and movements for animal liberation":

By first, not being so fucking judgemental of people who eat animals. Long before there was an animal rights movement, there were indigenous peoples defending the earth and her animals with their lives. And they still are! Just because they eat meat doesn’t make them the enemy. Until we learn tolerance we will continue to be disenfranchised.[3]

Communities include neighborhoods and towns that are small enough for residents to make decisions at face-to-face meetings.

Societies refer to federations of communities.

The organizations category includes groups and their federations.

Everyday anarchy includes anarchic projects and phenomena that exist all around us even in capitalist societies.