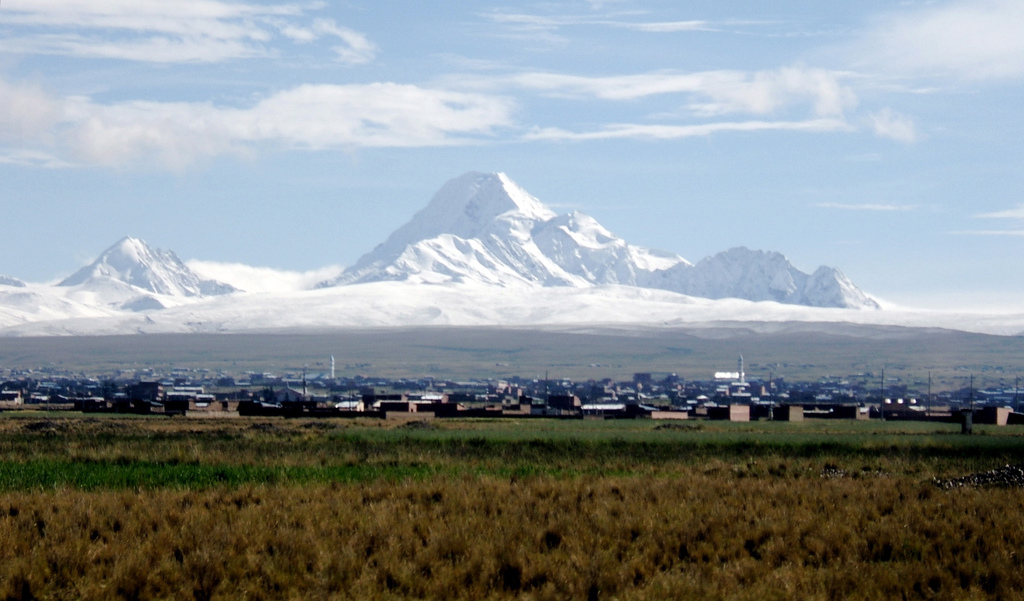 Over a million people[1] live in the Bolivian city of El Alto, mostly indigenous Aymarans whose families have migrated from the countryside over the past few decades. The state has provided the city with very little infrastructure, and residents have found ways to govern their own affairs and manage their own economy through neighborhood councils and unions.

Between 500 and 600 neighborhood councils make decisions and confederate into the Federation of Neighborhood Councils (FEJUVE), which meets monthly. Regular decisions are made by voting, but very important decisions require consensus. Positions of political representation are “compulsory and by rotation.”[2] Each neighborhood council has about 200 members. Peter Gelderloos notes, “More men than women sit on these committees; however a greater percentage of women take on leadership roles in FEJUVE than in other Bolivian popular organizations.”[3]

Neighoborhood councils organize families to get electricity and water, build sewers, streets and sidewalks, and construct public goods like parks and schools. Parent's committees manage education of the youth. Communities run a preventative health clinic, based in traditional and herbal medicines.[4]. The neighborhood councils have taken the lead in building a public university in El Alto.[5] Collective goods are usufructory, meaning any individual or family can acquire them simply by using them.[6]

The main economic unit in El Alto is the family. The majority of workers are able to rotate from one job to another, and thus avoid extreme division of labor. Raúl Zibechi argues that adult men experience no economic exploitation or alienated labor, but women and children are still subjugated within their communities.[7]

Many families sell meat, bread and other groceries at market stalls managed by the unions. [8] The New York Times describes the large market:

Here vendors by the thousands offer a huge array of goods: piles of used T-shirts and other clothing that arrive in bales from the United States; cars, new or used (and sometimes stolen); neatly arranged arms, legs and heads from broken Barbie dolls; electric guitars; mummified baby llamas; pickax handles; and myriad other items. Each week, millions of dollars pour through the market, which operates in an almost total vacuum of government intervention, taxes or regulations.[9]

Due to the lack of state regulation, some observers consider El Alto's economy a prime example of neoliberalism.[10]

In El Alto, the state police are often an accomplice to thieves, rapists and attackers. Neighborhood councils therefore consider recourse to the state justice system “unthinkable.” When possible, the councils resolve conflicts between neighbors. [11]

Collective self-defense groups hang dolls outside houses that have been robbed, as a symbolic warning to thieves that they will be killed when they are caught. Residents sometimes do kill thieves upon catching them. Zibechi writes, “There is no question that this form of 'El Alto justice' is too drastic,” but residents are still looking for other options. If a thief is expelled, he sometimes comes back the next day, with police on his side, seeking revenge on those who expelled him. Police and thieves infiltrate community justice meetings and take revenge on residents based on what they say at the meetings.[12]

Zibechi posits that rural Aymaran traditions of community justice “may in time come to fruition in the cities.” The rural Aymara communities, through popular assemblies, elect communal authorities who administer punishment. Whenever possible, the aim is to reintegrate the person back into the community.[13]

In 2003, people across Bolivia rose up against a plan to export gas to the US for a cheap price. In October 2003, “residents of El Alto organized through neighborhood councils and other means, operated as a neighborhood government that supplanted the delegitimated and absent state. Descriptions of the insurgency all indicate that there was no single organization or leadership, and that actions were carried out directly by the residents of the neighborhoods, overriding all other institutions and organizations, even the ones created by them beforehand." In 2006, Evo Morales took power thanks to the strength of social movements. Morales's administration has since partially nationalized the country's gas reserves and granted new rights to indigenous people.[14]

The Bolivian state has tried to regulate and restrict the El Alto rebellion. Notably, the Law of Popular Participation shifted some control from popular assemblies into more restricted and less participatory councils.[15]