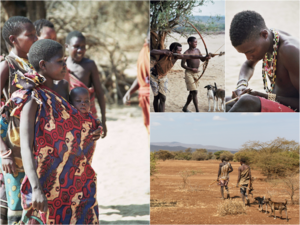 The Hadza are an egalitarian society in east Africa ("Tanzania") who have no chiefs or other human authorities and also no gods. Even the children are free to do as they wish, and they treat nonhuman beings as equals.

“We don't have a leader. All of us look like leaders. We lead ourselves. That is why when the young male like him, when he says 'I'm going somewhere,' nobody will stop him,’” reports Hadza member Shani Msafin-Sigwaze.[1]

The Hadza certainly are egalitarian (Woodburn 1979, 1982a). This does not mean that there are no individuals who would like to dominate others and have their way. It is simply difficult to boss others around. If a Hadza tries to tell others what to do, which does happen now and then, the others simply ignore it; if he or she persists, they just move to another camp. Of course, the bossy person could follow them, but if people move to several different locations, the bossy person cannot control them all at once.[3]

According to Wikipedia, the Hadza do not have a religion:

While the Hadza certainly have cosmologies and myths they believe in and pass on from generation to generation, they are generally not characterized as having a formal, complex religion. This is because they don't have places of worship, religious leaders, gods, idols, belief in an afterlife, or frequent religious meetings, and so compared to the major world religions (e.g. Christianity, Islam, Judaism), they lack a formal religion.[4]

The Hadza do not believe in gods. They consider the sun (Ishoko) to be female and the moon (Seta) to be male, and the stars to be their children

The Hadza traditionally recognize two genders, and, according to Marlowe's observation and interviews, homosexuality is absent except in the sex play of young people.[5]