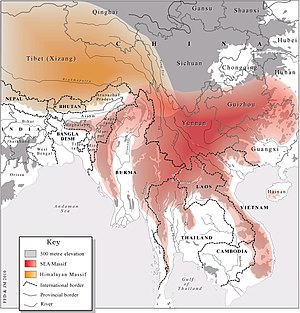 map of Zomia, also known as the Southeast Asian Massif

Zomia, also known as the Southeast Asian massif, is a region in the highlands of Southeast Asia, covering 2.5 million square kilometers and home to between 80 million and 100 million people. Zomia means "highlander" in several Tibeto-Burman languages. Political scientist James C. Scott argues that it is "the largest remaining region of the world whose peoples have not yet been fully incorporated into nation-states. Its days are numbered."[1]

Scott argues that these stateless cultures' decentralized organizational forms, choice of what to crops to grow, choice of where to live, and even their emphasis on oral culture all reflect centuries and centuries of strategically evading capture by the lowland states. Contrary to some scholars' description of the region's societies as "primitive," it is possible to understand Zomia as a space where people intentionally escape from the rule of the state. An elder of the region's Karen ethnicity explains the mentality of living up in the mountains where states have trouble reaching: "If we have to run, we will run up into the hills."[2]

Zomia has hundreds of ethnic identities and at least five language families.[3] Between men and women, Zomia's stateless upland societies tend to have a "rough egalitarianism which, not incidentally, includes a relatively higher status for women than in the valleys."[4]

While the lowland states rely on sedentary crops such as irrigated wet rice, Zomia's farmers prefer much more mobile slash-and-burn agriculture and select crops such as sweet potatoes and cassava, maize, and cardamom that require minimal labor, can be harvested at leisure, are hard to destroy, and can be stored underground for years while remaining edible.[5] They supplement this subsistence farming with gathering and hunting.[6]

According to Yale political scientist James C. Scott, everything about such societies — from the crops they grow to their kinship systems — can be read as anti-authoritarian social strategies. Scott documents the Hill People of Southeast Asia, an agglomeration of societies existing in rugged terrain where fragile state structures face a severe disadvantage. For hundreds of years, these people have resisted state domination, including frequent wars of conquest or extermination by the Chinese empire and periods of continuous attacks by slavers. Cultural and linguistic diversity is exponentially greater in the hills than in the state-controlled rice paddies of the valleys, where a monoculture holds sway. Hill People frequently speak multiple languages and belong to multiple ethnicities. Their social organization is suited for quick and easy dispersal and reunification, allowing them to escape assaults and wage guerrilla warfare. Their kinship systems are based on overlapping and redundant relationships that create a strong social network and limit the formalization of power. Their oral cultures are more decentralized and flexible than nearby literate cultures, in which reliance on the written word encourages orthodoxy and gives extra power to those with the resources to keep records.

The Hill People have an interesting relationship with the surrounding states. The people of the valleys view them as “living ancestors,” even though they have formed as a response to the valley civilizations. They are post-state, not pre-state, but the ideology of the state refuses to recognize such a category as “post-state” because the state supposes itself to be the pinnacle of progress. Subjects of the valley civilizations frequently “headed for the hills” to live more freely; however the narratives and mythologies of the Chinese, Vietnamese, Burmese, and other authoritarian civilizations in the centuries leading up to World War II seemed to be designed to prevent their members from “going back” to those they perceived as barbarians. According to some scholars, the Great Wall of China was built as much to keep the Chinese in as the barbarians out; yet in the valley civilizations of China and Southeast Asia, myths, language, and rituals that might explain such cultural defections were suspiciously lacking. Culture was used as another Great Wall to hold these fragile civilizations together. No wonder the “barbarians” gave up written language in favor of a more decentralized oral culture: without written records and a specialized class of scribes, history became common property, rather than a tool for indoctrination.

Far from being a necessary social advancement that people readily accept, the state is an imposition that many people try to flee. A proverb from the Burmese encapsulates this: “It is easy for a subject to find a lord, but hard for a lord to find a subject.” In Southeast Asia, until recently, the primary goal of warfare was not to capture territory but to capture subjects, as people frequently ran for the hills to create egalitarian societies.[8] It is ironic that so many of us are convinced we have an essential need for the state, when in fact it is the state that needs us.