(Redirected from US Occupy movement) 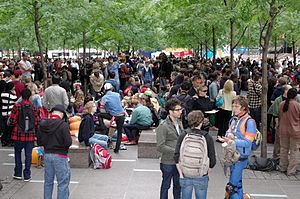 Initiated primarily by anarchists in the fall of 2011, the US Occupy movement brought ideas of class struggle and direct democracy to the forefront of the national consciousness. People occupied hundreds of parks and plazas around the country, practicing horizontal self-governance, training a new generation of activists, and organizing countless direct actions against the disproportionate power of the richest 1%. "Inequality is back in the news, largely thanks to Occupy Wall Street," wrote Paul Krugman of the New York Times.[1]

By early 2012, the parks had been cleared and the movement had mostly disappeared, aside from some national "days of action" and a few lasting working groups such as Occupy Sandy and Strike Debt. Some have claimed Occupy was mostly ineffectual and a missed opportunity, while others claim the long-term impacts will be quite significant.

"We might as well call it: The American left is dead," the New York Times reported the day before Occupy's public emergence.[2] Much of the organized left still adored the center-left president Barack Obama despite the administration's business-as-usual approach.

Some dissent was stirring, however. Working-class Americans had barely recovered from the effects of the 2008 financial crisis, and many wondered why the government had bailed out the big banks and enacted other policies allowing the rich to rapidly recover. Many wondered why there were no bailouts for student loan debt or for mortgage debt. Referring to the richest percentile, the mainstream economist Joseph Stiglitz declared that America had become a country "of the 1%, by the 1%, for the 1%."[3]

Early in 2011, Americans watched the Arab Spring unfold, and they watched the Spanish Indignados movement erupt in the summer. Through globally-connected social media coverage, revolt seemed to inspire revolt after revolt. It has since been speculated that there was a "world revolution of 2011."[4]

On 2 August 2011, anarchists in New York attended a Workers' World Party (WWP) rally that had been falsely advertised as a general assembly to a put into action the "Occupy Wall Street" proposal pitched by the Canadian magazine Adbusters. Frustrated by the authoritarian WWP, the anarchist-leaning majority of the crowd broke away and formed a real general assembly, establishing working groups that began planning the 17 September occupation of Zuccotti Park. They developed the slogan "We are the 99%" to draw attention to the extreme inequality between the richest 1% and everyone else.[5]

The camp held daily general assemblies that strove for full consensus but could make decisions with 90% agreement. 32 working groups formed to run a kitchen, a library, a health clinic, sanitation, livestreaming, and many other projects.[6]

The camp kept a strong commitment to horizontality. Using a simple technique called the "human microphone," crowds repeated speakers' remarks so that everyone in the park could hear. As Sarah Resnick recalls, people would refuse to amplify oppressive and hierarchical messages:

During announcements, a man who claimed to carry a message from the Egyptian revolution spoke to the GA: 'Choose your leaders now!' he cried. 'Choose one demand now or your movement is lost!' The human mic ceased amplification, drowned by audible disapproval. This 'leaderless resistance movement with people of many political persuasions,' as it calls itself, was not about to concede autonomy or participatory democracy or any of its founding tenets-not yet at least."[7]

Mark Bray interviewed 192 leading Occupy Wall organizers and found that 39% self-identified as anarchist and another 33% "had 'anarchistic' politics (anticapitalist, antihierarchical, direct action-oriented) that were largely indistinguishable from anarchism."[8]

Occupy encampments sprang up around the country, but none were as militant as Occupy Oakland, established in early October. The day after a brutal police raid on the camp, a general assembly called for a general strike on 2 November. When 2 November came, masses gathered downtown under a "Death to Capitalism" banner, and tens of thousands shut down the Oakland port. A black bloc-led march smashed corporate windows, and a nighttime riot, according to a first-hand account, smashed "most of the businesses and city offices around the plaza, including a police substation."[9]

Peter Gelderloos reflects, "Occupy Oakland, which was far from nonviolent, triggered a general strike, spread critiques of capitalism that surpassed OWS's populist rhetoric, and disrupted the functioning of the government and economy far more than any other Occupy."[10] The "violence" reported by Gelderloos only referred to vandalism and graffiti, and perhaps some unarmed self-defensive tactics during such actions.

Crime went down by 19% in Oakland during the encampment. Rebecca Solnit reports, "Occupy was so powerful a force for nonviolence that it was already solving Oakland's chronic crime and violence problems just y giving people hope and meals and solidarity and conversation."[11]

While some opponents of Occupy Oakland called the camp a bunch of "white agitators," this discourse erased the prominent role of people of color. According to one account, "Occupy Oakland was clearly one of the most racially and ethnically diverse Occupy encampments in the country—composed of people of color from all walks of life, from local business owners to fired Oakland school teachers, from college students to the homeless and seriously mentally ill."[12]

Occupy Wall Street and Occupy Oakland were cleared in November. Writing in Harpers, Jeff Madrick argued that government repression was "the real cause of Occupy's decline." He elaborated, "Taken together, the coordinated and disproportionate actions of the NYPD, the FBI, and Homeland Security represent a campaign of suppression without which Occupy might well have evolved into something more formidable."[13]

According to David Graeber, when authorities cleared the camps, "the liberal establishment more generally, made a strategic decision to look the other way."[14]

As recounted by Rebecca Solnit in 2012, Occupy led to many small victories:

Occupy Wall Street helped Manhattan restaurant workers defeat a lousy boss and a worker lock-out to unionize a restaurant in the Hot and Crusty chain. (While shut out, the employees occupied the sidewalk and ran the Worker Justice Café there.) In Providence, Rhode Island, the Occupy encampment broke up late last January, but only on the condition that the city open a daytime shelter for homeless people. At Princeton University, big banks are no longer invited to recruit on campus, most likely thanks to Occupy Princeton. There have been thousands of little victories like these...

Ironically given the Occupy movement's decision to eschew electoral politics, some of its biggest short-term impacts may have been in this field. David Graeber asserts that Occupy saved Barack Obama from losing the 2012 presidential election to Mitt Romney.[15] In 2016, Bernie Sanders, a basically social democratic candidate captured 43 percent of votes in the Democratic Party presidential primary, despite a lack of corporate funding and a virtual media blackout of his campaign early on. Sanders talked frequently about inequality and the 1%, and some of Sanders's own staff admitted that the campaign owed its surprising degree of success to the groundwork laid by the Occupy movement.

Graeber argues that, for all of Occupy's missed opportunities, its effects on its participants and on the population may be more far-reaching than any short-term analysis could show:

[I]n America, movements that have successfully aimed for a broad moral transformation of society (from the abolitionists to feminism) have taken much longer to see concrete results. But when they do, those results are deep and abiding. In one year, Occupy managed to both identify the problem-a system of class power that has effectively fused together finance and government-and to propose a solution: the creation of a genuinely democratic culture. If it succeeds, it is likely to take a very long time. But the effects will be epochal.[16]

Despite lasting projects like Strike Debt and Occupy Sandy, the movement generally did not institutionalize, leading many Anarchists to criticize Occupy's lack of structure. Mark Bray argues that a relative lack of anarchist organization led to Occupy Wall Street being a missed an opportunity to recruit people discovering anarchist ideas into long-term projects and groups:

[W]hen I step back to evaluate the tangible political outcome for the anarchist movement after months spent before a world spotlight with thousands of eager new people beating the doors down to get involved, I get the sinking feeling that to some extent we too “glided through these events like ectoplasm through a mist.” We didn’t even have any competing leftist formations. The field of political influence was left open to us and we didn’t get as much out of it as we should have. If we’re serious about building a powerful anarchist movement, then we need to create more alternative institutions and groups that can bring people in and give them an outlet to continue their revolutionary political engagement after the tents come down and the fingers stop wiggling. Because if we don’t, most people will understandably just continue to go about their business.

In contrast to Bray's critique of Occupy's lack of structure, others seemed to argued that the Occupy movement was generally too organized, or at least too centralized at each encampment. The Crimethinc Ex-Workers' Collective criticizes the Occupy movement for, in many instances, treating the general assemblies as "the governing bodies of the movement," discouraging people from using more disruptive and militant tactics than the consensus would allow:

Consequently, a movement that makes decisions by majority vote or consensus may have difficulty agreeing to utilize any but the most symbolic tactics. Can you imagine the residents of Ferguson, Missouri holding a consensus meeting to decide whether to burn the QuikTrip store and fight off the police? And yet those were the actions that sparked what came to be knwon as the Black Lives Matter movement. People usually have to experisnce something new to be open to it; it is a mistake to confine an entire movement to what is already familiar to the majority of our participants."[17]

Another critique came from Indigenous groups and accomplices who were concerned about about mostly white activists employing a rhetoric of "occupying" already stolen land. Eve Tuck and K. Wayne Yang recount, "That is, the ideal of 'redistribution of wealth' camouflages how much of that wealth is land, Native land. In Occupy, the '99%' is invoked as a deserving supermajority, in contrast to the unearned wealth of the '1%'. It renders Indigenous peoples (a 0.9% ‘super-minority’) completely invisible and absorbed, just an asterisk group to be subsumed into the legion of occupiers."[18]