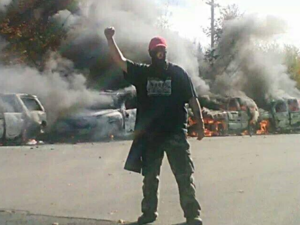 In 2013, indigenous Mi'kmaq campaigners successfully prevented fracking on their land in so-called "New Brunswick, Canada." They employed a diversity of tactics including road blockades and clashes with police. About a month before their victory, the Toronto Sun fretted "Militant Natives are causing trouble, and they aren’t going away."

They block roads, stop trains and fight the cops. Men and women dressed in camouflage, boots and bandanas. They come from reserves, wave red flags, set fires, tear up roads and declare sovereignty for their tribes. They are the so-called ‘Warrior Societies’ and they mean business.[1]

The fight took place on traditional Mi'kmaq land that Natives call Signigtog. South Western Energy Resources Canada and Irving Oil proposed drilling there for natural gas, and the gas would mostly be sent to the "United States." The company began testing on the land on 5 June 2013.

On 30 July, Mi'kmaq negotiators agreed to temporarily allow the drillers to perform seismic testing. On 28 September, resistance resumed as Mi'kmaq and Elsipogtog warriors blockaded South Western trucks. This 500 person-strong blockade lasted for two weeks.[2] Suzanne Patles of the Mi'kmaq Warrior Society explained the blockade's economic impact on South Western: "This barricade that has been happening here on this SWN Resource compound has been costing the company upwards of $60,000 per day, which is what they have stated in their court proceedings."[3]

On 17 October, the Royal Canadian Mounted Police raided the encampment and fired rubber bullets and pepper spray at the land defenders. Protesters threw rocks and Molotov cocktails. Six police cars were burnt, apparently in an act of retaliation. Police cleared the encampment by evening.[4]

There were claims that the fire was started by an agent provocateur.[5] However, the researcher Hayden Dahm writes that the cop cars were burned by participants in the struggle. In a post on Warrior Publications, the Kwakwaka’wakw writer Zig Zag (Gord Hill) agrees: "If police are going to go through the efforts of staging an attack on their own resources, it is only logical they would do this prior to a raid thereby justifying the raid itself. It is highly unlikely they would instruct an informant to do so after the raid has begun, a raid already justified by 'public safety' concerns, etc. In fact, the burning of the six police vehicles appears to be a response to the raid." [6]

On 1 December, Mi'kmaq warriors shut down a major highway for several hours. The indigenous movement Idle No More called for a Canada-wide day of action to be held the following day. People held many demonstrations and road blockades, and one blockade even shut down the Vancouver port for a few hours.[7]

In 2014, a provincial election "was seen as a plebiscite on fracking" according to Gord Hill. Voters threw out the pro-fracking government, and the incoming administration enacted a moratorium on fracking. Hill favorably compares the Mi'kmaq diversity of tactics to the more pacifistic Standing Rock struggle in the "United States": "The Mi’kmaq, even though they were much smaller in numbers than what we saw at Standing Rock, and with far less resources, were victorious."[8]