Anarchy in the Haitian Revolution 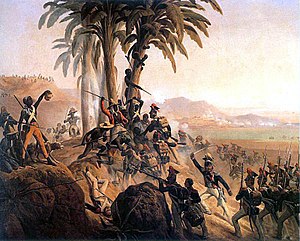 Battle of San Domingo, also known as the Battle for Palm Tree Hill, from Wikipedia

Following many years of hidden and small-scale resistance, African slaves in the French colony of Saint Domingue (or San Domingo) rose up in 1791 against their colonizers and slave masters. By 1804, they abolished slavery, expelled the French colonizers, and established the independent republic of Haiti.

Haiti was the name given to the Carribbean island by the indigenous Tainos before colonizers arrived, slaughtered the entire indigenous population, and imported African slaves.

There, between 1791 and 1804, we witness one of the most titanic struggles ever engaged in between (enslaved) workers and their overlords. It is through an examination of the events surrounding that struggle that we can clearly measure the strengths and weaknesses of our dragon and hydra: centralized and decentralized forces of change.”[1]

In the years preceding the revolution, slaves resisted their conditions through subversive ritual, strikes, running away, and occasionally violent revolts.

Gathered in private, slaves would practice ‘’voodo’’ rituals aimed at controlling their masters’ souls. As many as two-thirds of the slaves had been born in Africa on the revolution’s eve, and thus the rituals borrowed elements from a variety of African traditions.[2] Slaves sang, “We swear to destroy the whites and all that they possess; let us die rather than fail to keep this vow.”[3]

In public, they found ways to more subtly maintain a culture of opposition. When they heard the church’s funeral bells, Blacks sang along with their own lyrics, “One good white is dead. The bad ones are still here.”[4] The historian Laurent Dubois speculates that the hidden meaning may have been, “[T]he only good white was a dead one.”[5]

Slaves commonly walked off the job and ran away, for short and long periods of time. In 1744, sixty-six slaves walked off the plantation in protest of a cruel overseer. The overseer retaliated by killing one of the strikers, a pregnant woman. The slaves then killed the overseer and were condemned to death, but the governor intervened to save them. According to Dubois, “Such strikes occurred with some regularity and often led to the negotiated return of the slaves.”[6] Probably as a result of such actions, slaves secured a number of rights, including the right to have their own garden plots and to spend most of the weekend tending to their plots and selling the products in town for personal profit.[7]

At times, the runaways or ‘’maroons’’ left permanently, and by 1751, there were about three thousand maroons.[8] Many lived under the leadership of the chief Mackandal. Occasionally invoking Allah and asserting an ability to turn into a fly, Mackandal organized a large army of maroons to try to poison the white masters’ water. He was betrayed, captured, and burned alive. Some followers believed he changed shape and escaped just before his execution in 1758.[9]

On 21 August 1791, slaves began a series of arsons and massacres around the region of Le Cap. On 22 August, a band inspired by a charismatic slave named Boukman destroyed a number of plantations. The revolt “was led by scores of decentralized bands of African workers.”[10] C.L.R. James summarizes:

Each slave-gang murdered its masters and burnt the plantation to the ground […] For nearly three weeks the people of Le Cap could barely distinguish day from night, while a rain of burning cane straw, driven before the wind like flakes of snow, flew over the city and the shipping in the harbour, threatening both with destruction.[11]

Committing a small fraction of the violence afflicted on them by masters, some slaves reportedly “violated women” and one allegedly "carried a white child on a pike as standard.”[12] Given the legacy of brutal enslavement, however, the rebels were “surprisingly moderate” in James’s judgment, and they “spared many of the men, women, and children.”[13]

Not long after the start of the revolt, the ex-slave Toussaint Bréda (later Toussaint L’Ouverture) decided to join in. At the age of 45, he was already known as “Old Toussaint.”[14] Toussaint would become the major figure of the revolution due to his tactical brilliance.

As the French Revolution went on, the Haitian revolution energized masses in Paris: “The slaves [...] had shown revolutionary France that they could fight and die for freedom.”[15] By August 1792, Parisian masses opposed slavery. On 11 August, a colonial agent in France lamented, “One spirit alone reigns here, it is the horror of slavery and enthusiasm for liberty.”[16]

In January 1793, French rebels executed the king, and Spain and England declared war on France. Spanish invaders of Saint Domingue received mass support from Blacks who wanted to expel French slave masters, and Toussaint became a Spanish military officer.[17] Replacing his given slave name with Toussaint L’Ouverture, he remained loyal to the Spanish even after French Commissioner Sonthonax declared his support for the abolition of slavery and promised freedom to those who joined the French side.[18]

Ashley Smith explains L’Ouverture’s motivation for hesitating to join the French side:

Toussaint was not fooled by the Spanish, and his decision was certainly not the result of some African allegiance to kingship. It was a rational calculation. He knew that Sonthanax had no power to abolish slavery; that lay in the hands of the assembly, which had yet to prove itself an ally of the slaves.[19]

In 1794, France’s National Convention officially abolished slavery in the French colonies. When he heard this news, L’Ouverture declared his allegiance with France.[20] As L’Ouverture accumulated substantial authority over the country, of the colony’s inhabitants grew impatient of his judgment.

L’Ouverture appointed prominent whites to top government posts, and he enacted harsh regulations and forced labor..[21] Even after Britain withdrew in 1798 and after the French dictator Napoleon seized power, L’Ouverture remained loyal to France. Shoatz argues, “Thus at one swell swoop, these leaders had been forced to play the role of neo-colonial compradors.”[22] As many Blacks worried about the possible reinstitution of chattel slavery, L’Ouverture himself acquired multiple plantations.[23]

A skilled fighter appointed by L’Ouverture to command the North Province, General Moïse became the adopted nephew of L’Ouverture. Still, Moïse had strong misgivings about the ongoing exploitation of Blacks. He remarked, “Whatever my old uncle may do, I cannot bring myself to be the executioner of my colour.”[26] On 22 and 23 September 1801, Blacks in many areas rose up with the cry, “Long live Moïse” and killed several hundred whites. Toussaint responded by executing Moïse on 21 November. [27]

Betrayed and captured by the French General Charles Leclerc, Toussaint was taken to France, where he died in prison. Toussaint's chief lieutenant Jean Jacques Dessalines led Toussaint's army to expel France in 1804. However, “Dessalines showed himself to be a cruel tyrant over the Haitian people. Thus, he was assassinated by them within a few years of assuming power.”[28]

"Thus, we can see how Haiti’s dragon forces played a very ambivalent role in the rebel fight for independence: They started out as tenacious and brilliant fighters […] During the course of the revolutionary struggle, they all opportunistically switched to the French imperialist’s side, and went on to attempt to drown the still revolutionary masses and their decentralized group in blood; hoping that way the French would allow them to serve as a new elite class of African policemen against a re-enslaved African worker’s class.

Failing to suppress the rebels, the dragon forces rejoined the hydra elements and lent their [weight] to totally defeating the French, only to once again turn against the revolutionary masses by establishing themselves as a dictatorial and exploitative African elite.

For its part, the decentralized hydra forces never veered from their objectives of winning as much freedom from servitude and oppression as possible. From the pre-revolutionary times of Mackandal, up through the 1791-1804 Haitian revolutionary war, and even down to our time, they’ve known that in addition to fighting the French during their revolution, they were also under attack by Toussaint’s dragon forces, who displayed hatred and fear of everything from their refusal to relinquish their maroon/decentralized organizational formations, to their practice of their traditional Vodum (Voodoo) spiritual systems, the latter which did a great deal to inspire their soldiers to martyr themselves to the cause of freedom.

Then, after being pushed to the side after the French were driven out, the decentralized hydra elements were forced to—again—go underground and eventually morph into semi-secret Vodum societies that until today remain a little recognized or understood autonomous element amongst the oppressed Haitians."[29]