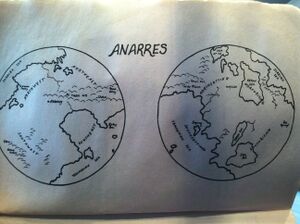 Map of Anarres, from The Dispossessed

Anarres is an Anarchist-run moon in Ursula K. LeGuin's novel The Dispossed. About two hundred years[1] before the start of the plot, the neighboring capitalist planet Urras had sent its anarchist rebels there, where they proceeded to organize a society based on the Anarchist theories of Odo.

Pravic, Anarres' language created by the early resident Fargiu[2], avoids possessive language except when explicitly talking about possession or hierarchy. Instead of saying “my mother” and “my hand”, one says “the mother” and “the hand”. Instead of saying “this one is mine and that's yours,” one says “I use this one and you use that one.”[3] Post-anarchist critic Lewis Call praises the anarchistic qualities of Pravic but also emphasizes and reiterates Le Guin's own apparent criticism of Pravic's hyperrationalism, evident in its virtual lack of swear words. "Language cannot be purely rational," Call remarks, "for the humans who speak it certainly are not."[4]

There is no gender hierarchy or gendered division of labor on Anarres.[5] All children experiment sexually with boys and girls.[6] The novel does not appear to mention genderqueer residents.[7] Pravic does not use possessive words for sex, except when describing rape. So, someone says that two people “copulate”, rather than saying one “fucks” another.[8] Adults typically live collectively in dormitories, singles in single rooms and couples in double rooms. Partnerships can be life-long, but there is no marriage.[9]

As elaborated in the Decisions section, Anarrestis proclaim a rigorous commitment to horizontal decision-making. However, Shevek's friend Bedap believes Anarrestis have unwittingly built a tyranny of majority public opinion: “We've let cooperation become obedience. On Urras they have government by the minority. Here we have government by the majority. But it is government.” To illustrate, Bedap mentions his and Shevek's friend Tirin, who wrote a play that audiences falsely construed as authoritarian. Although Tirin had trained to be a math instructor, the Division of Labor office repeatedly posted him only in manual labor posts and refused to post him in math instruction as he preferred.[11]

The Production and Distribution Coordination (PDC) administers economic production based on the decisions of syndicates, federatives, productive individuals and of administrators elected by lot for four years from a pool of volunteers.[12] The PDC has some authoritarian functions, such as the monitoring and censoring of Anarrestis' communication to other planets.[13] Bedap argues that the PDC has become “an archistic bureaucracy”.[14]

PDC meetings have no formal procedure, and they may be described as somewhat chaotic. The typical PDC meeting “went very fast, several people often speaking at once, nobody speaking at great length, a good deal of sarcasm, a great deal left unsaid; the tone emotional, often fiercely personal; an end was reached, yet there was no conclusion. It was like an argument among brothers, or among thoughts in an undecided mind.”[15]

In the city of Abbenay, there are about 200 semiautonomous neighborhoods. It is not clear what exact mechanism, they use to make decisions, such as a council or assembly.[16] Although the exact mechanism of their coordination is not explained, federatives of communities apparently communicate to the PDC “the priorities of each of the general economy”.[17]

In a 1979 interview with Reason, the anarcho-communist Murray Bookchin suggested that Anarres's PDC had too much power and communities had too little:

REASON: What do you think of the anarcho-communist society in that novel? Is it something of the sort that you would like?

BOOKCHIN: No, it isn't. It's an anarcho-syndicalist society. And I think that Ursula Le Guin is conscious of the limitations of such a society. Anarcho-communism, or libertarian communism, is not anarcho-syndicalism. I feel close to the anarcho-syndicalists, primarily because they are antiauthoritarian, but I don't believe that society will be structured around factories or work places. I believe that a truly libertarian society will be structured around communities, not around economies: that the economy will merely become part of the community.

What I think Ursula, whom I greatly admire—it's been my pleasure to have contact with her on a more than purely literary basis, in the sense that we've exchanged good vibes with each other—what I think Ursula is trying to demonstrate is that in such an anarcho-syndicalist society, or for that matter, in an anarcho-communist society, you can create a kind of tyranny in the name of the libertarian ideal.[18]

The Anarresti economy is based on usufruct, meaning any individual or group has a right to use and occupy any land, building or materials that are not already being used. There is no permanent ownership of anything except for personal possessions. As Shevek was taught as a child, “Nothing is yours. It is to use. It is to share. If you will not share it, you cannot use it.”[19] One may take what they want from any of the goods depositories,[20] sleep in any of the dormitories, and eat at any the cafeterias. The economy does not use currency.[21]

On Anarres, human beings are thought to possess a "natural incentive to work--his initiative, his spontaneous creative energy".[22] In fact, the Pravic language uses the same word for "work" and "play." If work is coerced, hierarchical, or boring, then it is not considered work at all but "kleggich," meaning drudgery.[23] Some people work independently, while others work at at worker-managed firms called syndicates. The syndicates, in turn combine into regional and global federatives.[24] With computers, the PDC collects information on supply from the producers and information on demand from the communities. The computers use this information to calculate where labor, materials, and products need to be sent.[25]

The average person works 5 to 7 hours a day, on 2 to 4 days of out of every 10.[26] People request and receive job postings from the Division of Labor office (DivLab). One may theoretically refuse their job posting, but such refusal is rare in practice.[27]. Some professions on Anarres include farming, carpentry, sewage, playwriting, musical instrument manufacture and repair, education and health care. Some additional workplaces include a glassworks, wire factories, laundries, and small-goods distributories.[28] Through the transport federative, workers provide free public transportation with trolleys, trains and ships.[29] The PDC requests that for one out of every ten days everyone perform an undesirable job such as garbage collecting. One only performs a dangerous job like mining for a half a year in their lifetime, and people “take the dangerous, hard jobs because they take pride in doing them, they can—egoize, we all it—show off?--to the weaker ones.”[30]

At learning centers, a class may be organized by students' initiative, a teacher's initiative, or both.[31] Children follow a curriculum that introduces them to all of the adult's professions.[32]

Anarres apparently has a zero-waste economy, as Shevek is surprised to see people from the neighboring planet Urras produce waste without intending to reuse it.[33] The city of Abbenay runs on wind and geothermal power, and residents turn off the heat when the outside temperature rises above 55 degrees Fahrenheit.[34] Soon after the initial settlement on Anarres, almost eighteen thousand residents spent two years planting trees in the West Temaenian Littoral.[35]

Freighters from Urras bring fossil fuels to Anarres and exchange them for metals, uranium and gold. Anarres continues trading with Urras, in part out of fear that Urras would otherwise invade Anarres for resources.[36]

When someone neglects their share of work or causes harm to others, they get reprimanded, shunned and sometimes even beaten up by their neighbors. In a small community, an uncooperative person may be taken off of the meal listings, and he will therefore have to cook and eat meals by himself.[37] If a rapist does not quickly get to a therapy center, he is likely to face quick revenge from the victim's neighbors.[38] Because there are no class divisions and one can take what they want from a goods distributory, there is little incidence of theft. “As for violence,” Shevek explains, “well, I don't know Oiie; would you murder me ordinarily? And if you felt like it, would a law against it stop you? Coercion is the least efficient means of obtaining order.”[39]

There are no prisons on Anarres[40], although people are sometimes heavily pressured to go to the Asylum on Segvina Island, which arguably functions as a prison.[41]

In 740, workers on Urras rose up in an anarchist revolution based on the theories of Odo. In 771, Urras sent its Odonian rebels of Urras to Anarres, where they proceeded to build an anarchist society. Most of the Usratti miners who had settled on Anarres in 738 chose to return to Urras.[42] According to Shevek, all Anarrestis are permanent revolutionaries.[43]

Anarres has a distrustful relationship with other planets and even has a law against any Urrasiti landing anywhere on Anarres except for the landing port where trade occurs.[44] The PDC coordinates a Defense Federative.[45]