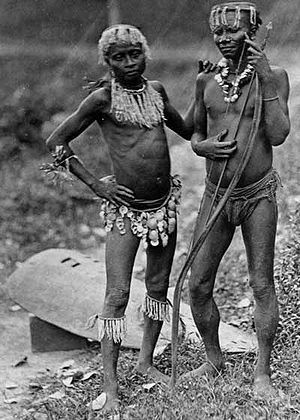 The Andamanese are a group of stateless peoples with a hunter-gatherer tradition in the Bay of Bengal's Andaman Islands, between India and Myanmar. The anthropologist A.R. Radcliffe-Brown documented that the Andamanese did not have government, although elders tended to have a disproportionate influence during decision-making, by virtue of their experience.

There is no organized government in an Andamanese village. The affairs of the community are regulated entirely by the older men and women. The younger members of the community are brought up to pay respect to their elders and to submit to them in many ways. It has already been shown how, in the distribution of food, the elders get the best share. When it is a question of shifting camp to some better hunting ground the opinion of the older men would weight against that of the younger if they disagreed. It must not be thought, however, that the older men are tyrannical or selfish. I only once heard a young man complain of the older men getting so much the best of everything. The respect for seniority is kept alive partly by tradition and partly by the fact that the older men have had a greater experience than the younger. It could probably not be maintained if it regularly gave rise to any tyrannical treatment of the younger by the elder.[1]

The Andaman Islanders, west of Thailand, have no leaders, no idea of symbolic representation, and no domesticated animals. There is also an absence of aggression, violence, and disease; wounds heal surprisingly quickly, and their sight and hearing are particularly acute. They are said to have declined since European intrusion in the mid-19th century, but exhibit other such remarkable physical traits as a natural immunity to malaria, skin with sufficient elasticity to rule out post-childbirth stretch marks and the wrinkling we associate with ageing, and an ‘unbelievable’ strength of teeth: Cipriani (1966) reported seeing children of 10 to 15 years crush nails with them. He also testified to the Andamese practice of collecting honey with no protective clothing at all; “yet they are never stung, and watching them one felt in the presence of some age-old mystery, lost by the civilized world."[2]

Andamanese peoples and their languages are under threat of extinction. Survival International reported that in 2010, the last speaker of the Bo language died, and as of 2012, the Jarawa people was threatened by "human safaris" that went through the islands, disrupting native hunts and sometimes leading to sexual abuse of Jarawa women.[3]