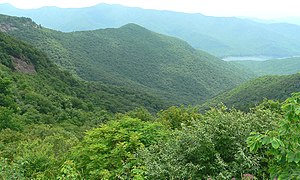 In all of North America, Appalachia's Blue-Ridge forests and mixed mesophytic forests have the greatest number of plant and animal species unique to an area. The forests stretch through Alabama, Georgia, Kentucky, Maryland, North Carolina, Ohio, Pennsylvania, and Tennessee, Virgnia, and West Virginia.

As in any ecosystem, decentralized networks of beings interact in ways that stabilize the entire system. Energy flows from plants to the animals that consume them, to decomposers (microbes) that process animal carcasses, and back to the plants. As in any forest, the trees are connected underground through a vast mycorrhizal network in which trees and fungi share resources and information with each other.

In the Blue-Ridge mountains, plant species include magnolias, hickory, sassafras, ginseng and mayapple. Animals include red salamanders, black bears, and freshwater mussels. In the mesophytic forests, plants include ginseng, and animals include bobcats, land snails, and songbirds.[1]

According to Cherokee mythology, there once was no land, only water and sky. Animals lived above the sky, but one day the water beetle ventured into the water, found mud at the bottom, and brought some mud back to the surface and left it there to dry. The mud grew and grew until it formed land. The animals decided that once the mud dried, they would go make their homes on it. Volunteering to see if the mud had dried, the Great Buzzard flew down from the sky. Flying above the drying land, he became tired. His wings hit the ground, forming the mountains and valleys that exist today.[2]

Cherokees named the land Ketuah and considered its plants, animals, mountains and rivers to have spiritual powers. Killing any animal (except bears, who they said had declared a failed war on the humans) required a ceremony to show respect, and virtually all parts of the hunted animals were used.[3] Cherokees altered the land in a number of ways: burning underbrush to improve visibility for hunting and encourage deers to forage, clearing forests to build villages and to grow corn, beans, squash and sunflowers.[4] Cherokees held land in common and had no centralized government until the eighteenth century.[5]

In the words of the Beehive Design Collective, "People have migrated through Appalachia for millennia, from First Nations folks to people escaping enslavement...Survival in the pre-industrial world meant resourcefulness, thrift, reusing old materials, and taking only what you could carry. Appalachian communities relied on their neighbors and on the food and fuel they could harvest themselves...Folks used and changed the land to meet their needs, but they did so within the land’s ability to replenish itself."[6]

The Appalachian forests are currently threatened by coal mining and logging, and the mountain justice movement has arisen to stop the strip mining of coal and protect the Appalachian mountains and ecosystems. Surface mining--including the practice known as "mountaintop removal"--has destroyed over 500 Appalachian mountains.[7] Coal production is linked to increased rates of "chronic pulmonary disorders and hypertension [and...] mortality; lung cancer; and chronic heart, lung, and kidney disease."[8]