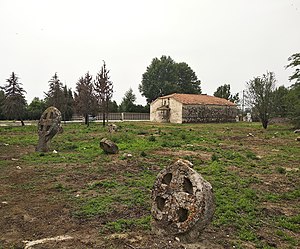 A Christian heresy founded in 10th-century Bulgaria by a priest named Bogamil, the Bogomils practiced civil disobedience and advocated anarchism, veganism, and sometimes free love. They allied with the largely pagan Bulgarian peasantry against the king's attempt to impose Christianity. As the Bogomils' ideas later spread to Western Europe, they influenced the Cathars.[1]

Silvia Federici writes: "The Byzantine authorities were most alarmed by the Bogomils' 'radical anarchism,' civil disobedience, and class hatred. As Presbyter Cosmas wrote in his sermons against them: 'They teach their own people not to obey their masters, they revile the wealthy, hate the king, ridicule the elders, condemn the boyars, regard as vile in the eyes of God those who serve the king and forbid every serf to work for the lord.'"[2]

Women played a large role in the movement.[3] Thanks to the influence of the Massalians, the Bogomils discarded their earlier sexual puritanism. Arthur Evans explains:

"At first they were strictly puritanical but in time came closer to the Messalians. 'Under the increased influence of Massalianism, the Bogomils entirely lost their reputation for puritanism and had become associated with the most extreme form of sexual indulgence' [...] In the early 14th century, when Massalian influence was at its greatest, a Bogomil monk named Lazarus appeared in Tirnovo, the capital of Bulgaria. He advocated nudism and sexual freedom as ways to salvation. Arrested, but refusing to recant, he was consequently branded on the face and exiled (Runciman, 97). Another Bogomil, Theodosius, advocated orgiastic sex, but his fate is not re-corded. Most Bogomils did not share these views, but they were an example of where Bogomil teaching could lead."[4]