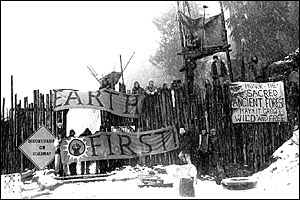 At Warner Creek, Oregon, members of Earth First! conducted an 11-month blockade from 1995 to 1996 that successfully protected the Warner Creek forest from logging. Activists established a "Cascadia Free State" in the middle of the only road to the forest, complete with "a watchtower, a moat and drawbridge, a wide variety of barricades, and frequent trainings and planning meetings for establishing other 'Free States'." [1]

The barricades begin below a former Forest Service gate, which has been converted into a wall by three barrels of cement fortified with rebar, 'locking' it permanently closed. If the Freddies do visit, they will first be greeted by a gatekeeper on the 15-foot high log wall and will soon need to ask very politely to enter if they expect the drawbridge to be lowered over the moat that is under construction. Friendly folks can come on up to the tent village where a large, dry living space has been created with tarps and equipped with a kitchen area, pantry, media table, and a warm fire circle. Tipis, shelters and tents are scattered all around, including one pitched right over the steel door lockdown set up in front of the gate. Above the gate stands a large, beautiful tipi constructed of downed trees and waterproofed with cedar bark found on the forest floor.[2]

People dug large ditches in the road, chained themselves to logging trucks and concrete-filled barrels, and erected a bipod that trucks could not drive past without endangering the inhabitants. One supporter held a 75-day hunger strike. Over the course of the summer, other free states emerged in Oregon and Idaho. The camp attracted many visitors. One resident estimated that between 500 and 1,000 supporters had come to see it and help out. In August 1996, Forest Service authorities arrived and let the protesters know the Clinton administration had decided not to allow logging in the forest. It turned out they told the truth, but at the time they refused to provide documentation. So, four women--Lupin, Raven, Hemlock and Madrone--refused to leave and were arrested. A bulldozer destroyed the camp, but the campaign had won. [3]