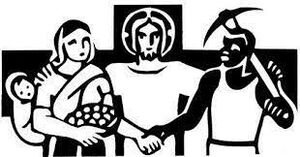 The Catholic Worker is network of communes whose members "live a simple lifestyle in community, serve the poor, and resist war and social injustice." As of 2022, there were 159 Catholic Worker communities in the United States and 28 in other countries including Australia, Canada, Dominican Republic, Kenya, Germany, Mexico, New Zealand , the Philippines, South Korea, Sweden, the Netherlands, Uganda and the United Kingdom.[1] Co-founder Dorothy Day identified as an Anarchist. She and Peter Maurin founded the organization in 1933.

--Personalism, a philosophy which regards the freedom and dignity of each person as the basis, focus and goal of all metaphysics and morals. In following such wisdom, we move away from a self-centered individualism toward the good of the other. This is to be done by taking personal responsibility for changing conditions, rather than looking to the state or other institutions to provide impersonal "charity." We pray for a Church renewed by this philosophy and for a time when all those who feel excluded from participation are welcomed with love, drawn by the gentle personalism Peter Maurin taught.

--A decentralized society, in contrast to the present bigness of government, industry, education, health care and agriculture. We encourage efforts such as family farms, rural and urban land trusts, worker ownership and management of small factories, homesteading projects, food, housing and other cooperatives--any effort in which money can once more become merely a medium of exchange, and human beings are no longer commodities.

--A "green revolution," so that it is possible to rediscover the proper meaning of our labor and our true bonds with the land; a distributist communitarianism, self-sufficient through farming, crafting and appropriate technology; a radically new society where people will rely on the fruits of their own toil and labor; associations of mutuality, and a sense of fairness to resolve conflicts.