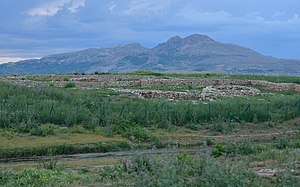 Archaeological findings from the Anatolian city of Cayonu contains evidence of a social revolution in the year 7200 BCE that installed a egalitarian, communist society lasting three thousand years. The lower layers of building structures demonstrate a shift from hunting and gathering to a patriarchal class society. Temples contained blood-encrusted daggers from human sacrifices, and one temple contained seven hundred skeletons stacked to the ceiling.

Then, in 7200 BCE, there apparently occurred a social revolution, according to Bernhard Brosius. Temples and large manors were burnt down and replaced with houses that were just as large but were roughly the same size. Slums and inferior shacks disappeared.

Not only did the revolutionaries of those remote times succeed in overthrowing a regime thousands of years old, bloody and exploitative - moreover, they also succeeded in developing their own alternative society, devising and realizing it. The social revolution of the year 7200 B.C. is the hour of the birth of neolithic communism. An egalitarian, classless society arises in which women and men are equal, a society which rapidly spreads over the whole of Anatolia and almost simultaneously over the Balcans and which endures for 3000 years.[1]

The clearest example of this Neolithic communist revolution is probably Catal Huyuk, which retained exceptionally well-preserved structures later extensively examined by archeologists. There, the roughly equal building sizes and possessions, the lack of indications of violence on the skeletons, and the content of the many preserved murals suggest that for two millennia there existed an ecologically-oriented society of up to 10,000 people with no gender hierarchy, no State, and no war.