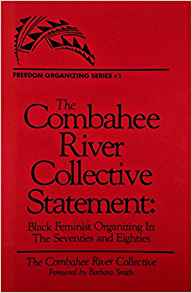 Formed in 1974, the Combahee River Collective (CRC) was comprised of black women who advanced a feminist, socialist, anti-racist, anti-authoritarian analysis. They employed the terms "interlocking oppression" and "identity politics" which have become major influences on the Left. An intersectional black feminist group, the CRC formed at a time when many feminists did not want to work on black people's issues, and many black-led groups did not want to campaign on women's issues (or even opposed reproductive health rights "on the basis that abortion was genocide for Black people.") They were named after Harriet Tubman's 1853 raid on South Carolina's Combahee River. Tubman's raid liberated 750 enslaved people.[1]

In 1977, the CRC published "The Combahee River Collective Statement." It committed to horizontal organization: "We believe in collective process and a nonhierarchical distribution of power within our own group and in our vision of a revolutionary society."[2] The statement clarified that the CRC worked on projects related to "sterilization abuse, abortion rights, battered women, rape and health care."[3] The CRC argued that oppressions are interlocking and that liberating people with intersecting oppressions would amount to dismantling all oppression: "If Black women were free, it would mean that everyone else would have to be free since our freedom would necessitate the destruction of all the systems of oppression."[4] The statement critiqued orthodox Marxism's sole preoccupation with class relations. While the CRC identified as "socialist" and "in essential agreement with Marx's theory," they rejected class reductionism: "We are not convinced, however, that a socialist revolution that is not also feminist and antiracist will guarantee our liberation."[5]