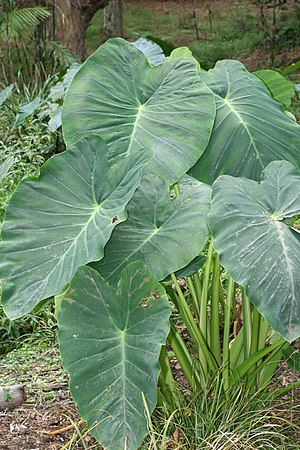 In 1995, indigenous and non-indigenous farmers in Hawaii’s Waiähole valley seized state land and planted a community-run taro patch on the site of an ancient patch. In 1998, they helped set up a network of taro farmers across Hawaii to rehabilitate ancient taro patches. The following is from Jacqueline Lasky's "Indigenism, Anarchism, Feminism: An Emerging Framework for Exploring Post-Imperial Futures".[1]

Additionally, I suggest that the contemporary taro farming movement in Hawaiÿi can be analyzed in terms of an anarch@indigenist site of struggle.[29] Rather than impose this emerging framework on to the loÿi (“taro patch”), I consider the convergences and divergences of the community taro patches with the themes and engagements discussed in this introductory article. In Hawaiÿi, and specifically the locale of Waiähole valley on windward Oÿahu where the first ‘modern’ community taro patch was rehabilitated upon ancient loÿi,[30] the ‘community’ taro patch has multiple referents: 1) a community taro patch for and within the local community; 2) a community taro patch located within a specific locale but for the broader taro farming community across the islands; and 3) a community taro patch in the traditional Hawaiian ahupuaÿa (“valley land division”) system of shared subsistence and sustenance with collective resource management (significantly unhinged in time and space).

The indigenous and settler taro farmers of Kalo Paÿa o Waiähole (“Hard Taro of Waiähole”)[31] organized in 1995 to rehabilitate an ancient taro patch they call the Mauka Loÿi (“mountainside taro patch”). They literally occupied state land designated as ‘open space,’ creating a communal taro patch open to all people who want to simply be in the loÿi.[32] This is aligned with anarch@indigenism in taking direct action that creates viable alternatives in the here and now, investing resources into lived experiences of and needs for an indigenous centered collective personhood. Moreover, the ÿohana (“extended family network”),[33] and not the individual nor the nuclear family, is the primary mode of organizing, and this is inclusive of non-blood relatives and non-indigenous peoples.[34] Kalo Paÿa also helped form a decentralized islands-wide network in 1998, Onipaÿa Nä Hui Kalo (“steadfast association of taro”), to support taro farmers in various locales to rehabilitate ancient loÿi and to re-create Hawaiian politico-economic practices and socio-cultural-ecosystem relationships. These re-connections to tradition are irreducible to an essentialized indigenous identity; rather, they empower old/new ways of being-in-relation, full of multiplicity, plurality and ‘play’ within contemporary contexts.[35] This, too, is in convergence with anarch@indigenism.

For several decades the taro farmers of Kalo Paÿa and Onipaÿa Kalo have confronted the exploitative resource uses—the literal taking of water out of streams that are the lifeblood of the loÿi—by governments (state and national, including the U.S. military), private businesses[36] and multinational corporations. The form of this confrontation has been in litigation at the state Water Commission and State of Hawaiÿi Supreme Court, which is a seeming divergence from the anarch@indigenist framework of non-participation. Nevertheless, Kalo Paÿa and their allies have been successful in codifying water rights for taro and its traditional cultivation in ways that chip away at the authority of the colonial capitalist system (and by providing legal ‘tools’ for others to chip away at ‘the system’ as well). They seemingly render the neoliberal order redundant to the extent that they ignore ‘no trespassing’ signs as they occupy state lands for indigenous Hawaiian uses, take back resources previously monopolized by colonial powers for traditional uses, recreate their own material and cultural economies that withdraw their consent for and dependency on consumer capitalist culture, and articulate a consciousness of themselves rooted within renewed indigenist intersubjectivities. The effectiveness of this double-edged approach of engagement and disengagement with the state is debatable and requires further research and analysis. My point is that the loÿi is a fruitful site for further investigation as an anarch@indigenist struggle. The Hawaiian sovereignty movement in general also exemplifies anarch@indigenist ways of being and doing (Goodyear-Kaÿopua 2008). As this emerging framework for the intersectionality of indigenism, anarchism, and feminism takes shape, the praxis of innumerable case-studies will inform its theoretical utility.