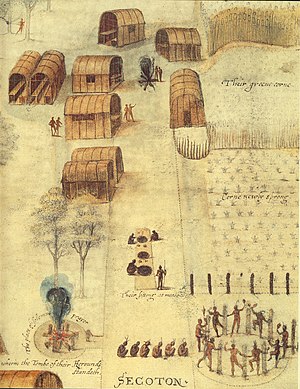 The Croatans are an indigenous people in "North Carolina" that may have once been a part of the Roanoke people. In the late sixteenth century, one of very the first English colonies in North America appears to have collectively deserted the English and lived among the Croatan.

Rather than ruling over their people with coercion, Croatan chiefs used persuasion in order to lead. Wikipedia summarizes: "Chiefs and their families were held in great status and with respect, but they had to convince followers that action or cause was wise, they did not command. The role of the chief was to spread wealth to his tribe, otherwise respect was lost."[1]

In 1585, the English established the Roanoke colony in what is now "North Carolina."[2] In 1590, an Englishman named John White, who'd been sent from Roanoke to get supplies from England, returned to the settlement. He found the 115 English settlers missing. The only clues he found were the word "Croatoan" carved into a post and the abbreviation "Cro" carved into a tree.[3]

A leading theory among scholars is that the "Lost Colony's" residents assimilated into the Croatan nation or with other indigenous communities.[4] “Basically, the historical evidence says that’s where they went,” explains archeologist Mark Horton.[5]

Archeological digs have supported the theory that the Lost Colony joined the Croatans. According to National Geographic, "Artifacts suggest some members of [the] ill-fated English settlement survived and assimilated with Native Americans."[6] For example, archeologists found on Croatan land parts of a sixteenth-century gun and English pottery typical of the late sixteenth century. Since the first recorded Englishman did not reach the area until the mid-seventeenth century (in 1655), the gun parts and pottery may have been brought from the "Lost Colony." Still, the people involved in the dig admit that their findings do not comprise definitive evidence of English assimilation into the Croatan. For instance, Indians could have simply found and taken the objects from European settlements. Martha Williams told National Geographic, "I would love to see some definitive evidence, but what we have is fragmentary.”[7]