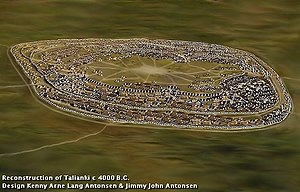 From 4800 to 3000 BCE[1] in what's now Moldova, Romania and Ukraine, the Cucuteni-Trypillian civilization had a population of more than 1 million people.[2] Cucuteni-Trypillian society appears to have been highly egalitarian, peaceful, and ecologically sustainable.

A common pattern is for equally-sized houses to be arranged in concentric circles around an open area that might have been used for popular assemblies and ceremonies. Although houses are the same size and look the same on the outside, the insides have extremely varied decorations suggesting individuality and playfulness. Moreover, the neighborhoods, while sharing circular arrangements, have different enough arrangements that archeologists believe the planning must have been from the bottom up. The largest site in Taljanky which has 1000 houses and covers 300 hectares.[3]

The Romanian sites are called Cucuteni and the sites in the former Soviet Union are called Trypilla. However, they form a unified culture.[4]

The circular arrangement of houses puts no one at the head and which leaves space in the middle for communal activity. Chris Knight likens it to a contemporary and relatively egalitarian village of Canela villagers in Brazil who also arrange their houses in a circle.[7] Before leaving a village or city, Trypillians would burn their houses.[8] The setup is also reminiscent of the Ju/'hoan/!Kung (San) village.[9]

Ukrainian minimalist fashion designer Svitlana Bevza has studied Cucuteni-Trippilian culture and based designs on it. She says, "The most precious part of Trypillian ceramic culture is cherishing the woman. And the symbolism of the woman - like a goddess, like a symbol of fertile land, like a symbol of birth - they cherished it a lot."[10]

Graeber and Wengrow elaborate on their economy:

As well as managing orchards, gardens, livestock and woodlands, the inhabitants of these cities imported salt in bulk from springs in the eastern Carpathians and the Black Sea littoral. Flint extraction by the ton took place in the Dniestr valley, furnishing material for tools. A household potting industry flourished, its products considered among the finest ceramics of the prehistoric world; and regular supplies of copper flowed in from the Balkans.[13]

The ecological impact of Cucuteni-Trypillia cities is surprisingly light, leading Graeber and Wengrow to speculate that residents "consciously managed their ecosystem to avoid large-scale deforestation."[14]

According to Svitlana Bevza, "There are a lot of things that we have to learn from the ancient people, from Trypillian people: their attitude to life and nature, because they understood that they depend on the nature."[15]