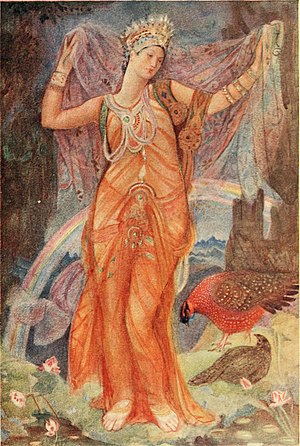 Some theorists have argued that the ancient Sumerian city of Uruk, in its earliest stages starting around 4000 BCE, had gender egalitarianism and participatory self-governance. There are public assembly spaces that would have accommodated popular decision-making, and celebration of the goddess Inanna may have signified a strong status of women. Around 3200 BCE, Uruk established a state which is the first known state in human history.[1]

According to Abdullah Öcalan, "the two sexes were still more or less equal" in the earlier period of Sumerian society.[2] Noting a decline in woman-goddess figurines, Öcalan hypothesizes that a shift from egalitarianism to patriarchy in Uruk coincided with the rise of the state:

"The fact that the founder goddess of Uruk is Inanna shows that she is far more ancient than [king] Gilgamesh and that the role of the mother-woman was still the leading one at the time."[3]

The closest the city had to a ruler may have been a male priest who is shown on imagery such as vases and statues. He's sometimes called a "priest-king," but there's "little we can say" about what political functions he might have held outside of ceremony and warfare.[4] He was sometimes portrayed as nude, which may have suggested a lack of gravitas toward him that a population would pay toward an actual king.[5]

Peter Gelderloos emphasizes the religious authority that these priests may have held:

Dating to around 4000 BCE, Uruk was the first city in the world. Prior and also contemporaneous to Uruk, the Fertile Crescent was filled with small farming settlements going back several thousand years to the development of agriculture in the region between 10,000 and 8000 BCE. In the centuries before and after the founding of Uruk, these settlements tended to contain small shrines, governed over by ensi, or priest-kings, assisted by a council of elders. They constituted a weak central power with a primarily religious authority, probably backed by age and lineage hierarchies.

The anti-civilization theorist Fredy Perlman, in Against History, Against Leviathan, speaks somewhat appreciatively of the earlier stages of Uruk which he calls by its Biblical name Erech (parenthetical clarifications added):

"From the standpoint of the Sumerians, nothing changes. In a sense they never leave the state of nature. This is probably what accounts for the exoticism that will continue to cling to what we will call 'early civilizations.' The Sumerians haven’t become zeks (prisoners). They’re still possessed. Sumerian women still give birth, not as machines for the production of soldiers and workers, but as living beings in close contact with the sources of Being. Sumerian men, especially older ones, still seek contact with the spirits of the winds, the clouds, even of the sky itself. In fact, they devote themselves to their searches more completely than they ever could before. Now all their energies are devoted to the dances, festivals and ceremonies. They no longer have to concern themselves with the trivia of material survival. The trivia are all done for them.

Furthermore, the Lugal (strong man) and his men bring far more generous gifts to the spirits than could ever be given before. The Lugal’s men have even built permanent shrines to all the spirits and powers, incredibly beautiful shrines, and around the shrines they’ve placed gardens and filled them with all the creatures of the deserts and forests.

Never before have people shown such homage, such respect, to the beings responsible for life. It is true that the Lugal builds the greatest shrine to his own deity. This is obviously presumptuous on the haughty Lugal’s part, since he cannot know that the spirits accept the hierarchic arrangement into which he places them. This is a type of revolution. But the Sumerians are not now going to turn against the Lugal for his haughtiness. They’ve gotten used to it, and instead of irking them, it now makes them smile with a certain pride. It is thanks to him that they can devote themselves so completely to the wellbeing of their city.

I have to admit to my questioner that the Sumerians would not part with a single one of the new (agricultural) implements. They do not long to return to the timeless Golden Age. They are in the Golden Age, more so now than ever before."[6]

It appears that Uruk's religion, while on one hand preserving much that was fulfilling about forager life, also created the specialist roles of Priest and Priestess which laid the groundwork for the rise of the State. Religious hierarchies would become religious hierarchies. Perlman speculates:

"But the golden Sumerians are no longer all of Sumer. In fact, in some later scholarly accounts, the golden Sumerians will not even exist. They will be dismissed with a single word. The word is Temple. The devotees of Inanna, the loving daughter of the Moon; the communicants with Anu, the spirit of the sky, are not the users of the new implements. They are not the administrators of the irrigation works, the builders of the great palaces, the heroes of the military encounters. They are what we will call Priests and Priestesses, oracles and diviners. All that is left in Sumer from the state of nature has shrunken to what we will call Religion."[7]

Öcalan locates in the religious sphere the rise of the state and entrenched patriarchy: "However, Uruk's struggle against Eridu (the city of the god Enki and perhaps the first priest-state) is legendary (an excellent example of gender struggle). Over time, less and less figurines of the woman-goddess were made and apparently, with the onset of the Bablyon period, the woman-goddess had been destroyed: Woman now was an official public and private prostitute as well as a slave."[8]

David Graeber and David Wengrow also hypothesize that there was a major shift, around 3200 BCE, evidenced by the destruction of assembly spaces and public buildings associated with the goddess Ianna:

"Around 3200 BC the original public buildings of the Eanna sanctuary were razed and covered with debris, and its sacred landscape redesigned around a series of gated courts and ziggurats. By 2900 BC, we have evidence for local kings of rival city-states battling it out for supremacy over Uruk, in response to which a five- and-a-half-mile fortification wall (whose building was later attributed to Gilgamesh) went up around the city’s perimeter. Within a few centuries, city rulers were setting themselves up as neighbours of the goddesses and the gods, building their own palatial houses on the doorstep to the House of Heaven and stamping their names into its sacred brickwork."[9]

Although religious hierarchies likely laid the groundwork for the state's rise, another crucial factor was probably climactic stress. From 3500 to 2500 BCE, increasing aridity forced people to live in more concentrated areas and made irrigation more laborious. This geographic concentration made foraging less viable and made urban residents increasingly reliant on cereal grains which are easily legible and taxable from above. James Scott writes, "Climate change, then, by forcing a kind of urbanization in which 90 percent of the population lived in settlements of thirty hectares or more, intensified the grain-and-manpower modules that were ideal for state formation."[10]