The Earth is a self-regulating system according to Earth system science and its more radical predecessor known as the Gaia hypothesis. The planet's biological, physical, and chemical components cooperate to stabilize the Earth's temperature, acidity, salinity, and atmosphere. Thus, the Earth does not function as a hierarchy or as merely a competitive struggle between all beings. Rather, members of a highly decentralized global network often cooperate to ensure mutual survival over billions of years.

James Lovelock and Lynn Margulis first advanced the Gaia hypothesis, jointly publishing in Carl Sagan's journal Icarus. At first, they characterized the Earth as a living superorganism, drawing harsh criticism from reductionist scientists such as Richard Dawkins, who denounced the notion as "teleological." Critics like Dawkins asserted that the Earth cannot self-regulate since it does not have the consciousness necessary to plan and have foresight. In 1983, Lovelock responded by programming a computer simulation called Daisyworld. In Daisyworld, sunlight-reflecting white daisies and sunlight-absorbing black daisies cooperated to stabilize the planet's temperature, allowing life to thrive for an extended period of time. The model demonstrated that planetary self-regulation does not require foresight or conscious planning.[1]

The biochemist Stephen Harding claims that such models have advanced the Gaia hypothesis into a Gaia theory. Harding has programmed more complex and realistic computer models of Daisyworld involving many types of plants, herbivores, and carnivores. This work further demonstrated the ability of the Earth to self-regulate. [2]

Meanwhile, in the 1980s scientists at NASA and the International Geosphere-Biosphere Program (IGBP) were studying the Earth as a system composed of interlocking chemical, biological, and climactic processes.[3]

Today, Earth system science is a mainstream body of science. It draws heavily on Gaian ideas but, in an effort to fit into dominant scientific culture, removes the reference to the Greek earth goddess Gaia. In Amsterdam in 2001, over a thousand delegates signed a statement, “The Earth System behaves as a single, self-regulating system comprised of physical, chemical, biological and human components.”[4]

Harding's book Animate Earth presents the charts above as evidence of the Earth's ability to self-regulate. The figure on the left shows that the the Earth has kept its conditions habitable for life for its 4.6 billion years of existence, despite the sun sending progressively more heat to the Earth. The middle chart shows that, until very recently impacted by extreme human impacts, the Earth kept its atmospheric levels of carbon dioxide within the stable range of 180 and 300 parts per million. The chart on the right shows that the Earth has consistently recovered even from mass extinction events, taking 5 to 10 million years each time. To Harding, this resilience "is strong evidence for Gaia."[5]

Harding warns, however, that humans have largely impaired Gaia by taking over half of the planet's surface and by causing unprecedented rates of destruction. Thus, there is no guarantee that Gaia will survive this time around: “the fact that biodiversity has recovered after previous mass extinctions is no guarantee that the same thing will happen again. After all, Gaia is now older and more stressed by the sun, and the current mass extinction is happening much more quickly than any other.”[6]

The nitrogen cycle is another example of self-regulation. Nitrogen is a key nutrient for life, but it isn't accessible until certain bacteria "fix" the air's nitrogen by bringing it into the soils and bodies of water. In a nitrogen-deficient ecosystem, bacteria that fixes its own nitrogen has a clear advantage over nonfixers, and the number of fixers will increase and enhances the ecosystem. Once there is abundant available nitrogen (it is toxic to an ecosystem in excess), the fixers lose their advantage over nonfixers. Thus, as Timonthy Lenton writes, "Reduced nitrogen input will lead to more nitrogen fixation; increased nirogen input, to less nitrogen fixation." This process has been observed in pastures and lakes and is theorized to be key to how the world's oceans maintain nutrient balance.[7] 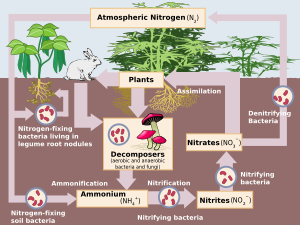 With each eon lasting a thousand million years, the Archean is the era from Earth's assembly 4.5 eons ago to the oxygen revolution 2.5 eons ago. Gaia theory suggests that life during the Archean adapted the Earth to make it a home. There emerged a self-regulating interaction between early photosynthesizers (cyanoacteria) who cooled the Earth by removing heat-trapping carbon-dioxide from the atmosphere and methanogen decomposers who warmed the Earth by converting bacteria into the greenhouse gases carbon dioxide and methane.[8] So, the photosynthesizers were like the light daisies of the Daisyworld model, and the decomposers were like the dark daisies. Together, they kept the planet at livable temperatures.[9]

Around 2.5 eons ago, photosynthesizers transformed the atmosphere from being methane-dominated to being oxygen-dominated. This transformation heralded a new geological era, the Proterozoic. This period saw the evolution of eukaryotes, when two cells symbiotically combined to form a more complex cell with a nucleus surrounded by a membrane. The new type of cell, the eukaryote, went on to become the building block of plants, animals, and fungi.

A key self-regulatory mechanism of the Proterozoic involved the deposit of calcium carbonate on the oceanic floor. Through such deposits, bacteria converted toxic soluble calcium into insoluble calcium. Although calcium is essential for many life forms, too much of it is deadly, and this self-regulatory mechanism would have been crucial for many beings' survival.[10]

Another example of self-regulation involved salt-regulation. Few organisms can survive with an abundance of salt, and oceans stayed within a safe salinity level. Various chemical reactions helped remove salt from the sea floor, and microorganisms deposited salt as sediments and as limestone.[11]

Lasting from 600 million years ago until today, the Phanerozoic marks the time when organisms evolved to be large enough that they could be seen with a human's naked eye.[12] During this period, the carbon cycle marked one example of planetary self-regulation, in which the vegetation sequestered carbon and produced oxygen, keeping atmospheric carbon dioxide within levels manageable for most life on Earth. This process has, of course, been disrupted by the capitalist system's unprecedented levels of deforestation and greenhouse gas emissions.

Raoul Vaneigem, formerly a theorist of the Situationist International, argues that the Earth engages in resistance to the grow-or-die, destructive capitalist system:

[N]ature has unpredictable fits of anger, sudden jolts that threaten the edifice of civilization. And the moment it refuses to pro­duce, nature, like workers in revolt, is deemed stupid, pit­iless and cruel.[13]

Many anti-authoritarian societies, communities, and movements have sought to live in harmony with and act in defense of the Earth. For example, see Earth First! and Earth Liberation Front.