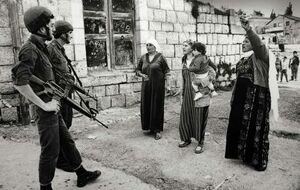 From November 1987 to October 1991, Palestinians carried out the Al-Hijara Intifada, which means the “Uprising of the Stones”. The unarmed, popular uprising cost Israel $2 billion and lent the Palestinian cause a heightened international legitimacy and urgency. During the rebellion, Palestinians in the West Bank and Gaza Strip governed themselves with grassroots committees devoted to tasks such as education, health care and agriculture. Although a formal leadership council emerged one or two months after the intifada's start, the majority of actions remained decentralized.[1]

Palestinian anarchists Ahmad Nimer and Beesan Ramadan consider the intifada an example of anarchy in action. Nimer contends, “[W]hat you lived back then was a committees based society, a society divided into smaller communities interacting between each other, to deliver what is best to the nation, the community took care of itself, when people took care of each other!” Ramadan explains, “People have done horizontal, or non-hierarchical, organization all their lives. It is already there in my culture and the way Palestinian activism has worked. During the First Intifada, for instance, when someone's home was demolished, people would organize to rebuild it, almost spontaneously. As a Palestinian anarchist I look forward to going back to the roots of the First Intifada. It did not come from a political decision. It came against the will of the PLO.” [2]

A group calling themselves the Unified National Command issued their first pamphlet on January 4, 1988. Although this group became a kind of formal leadership of the intifada, Mazin Qumsiyeh argues in Popular Resistance in Palestine that the majority of decisions came from the local committees:

But a close reading of events shows that the relationships were much more complicated and there was a more democratic, bottom-up approach in operation. This was key to the success of the intifada. According to Fatah activist Hatem Abd Al-Qader Eid, activists on the ground provided the main push behind the avoidance of too much reference to armed struggle and an emphasis on nonviolent mass civilian struggle. I confrimed this in interviews with key activists in Beit Sahour, including Hazem Qumsiyeh and uad Kokaly, who explained how information was passed on from local activists meeting in secret committees through a hierarchical network to reach Faisal Al-Husseini and his group...But even the directions of the local 'leadership' merely transmitted needs and decisions taken by popular committees.[3]

The First Intifada's organization rested on the formation of grassroots, decentralized committees in prisons, schools, neighborhoods, and industries. Analysts have described these committees as being "managed along roughly anarcho-syndicalist lines, with one vote for each worker-member."[4] The committees confederated into popular committees, which in turn were coordinated by the Unified National Leadership of the Uprising (UNLU). The UNLU has been described as "a democratic confederalist shadow state."[5]

Prisoners formed committees and conducted hunger strikes to win concessions. For eight to sixteen hours a day, prisoners would study and discuss Palestinian history, Marxism, and other topics.[6]

At high schools and universities, student associations organized demonstrations and coordinated deliveries of supplies and volunteers to refugee camps and poorer villages.[7]

Palestinians went on strike, refused to pay fines, and refused to close their shops. In 1988, the West Bank town of Beit Sahour decided to stop paying taxes to Israel. Israel's defense minister Yitzhak Rabin responded, “We will not let this kind of civil disobedience succeed," and Israel put the whole town under curfew for over a month, from 5 pm to 5 am each day. During the first four days, Israel imposed a 24-hour curfew.[9]

Palestinian violence mainly involved throwing rocks. The Israeli historian Benny Morris writes, “It was not an armed rebellion but a massive, persistent campaign of civil resistance, with strikes and commercial shutdowns, accompanied by violent (though unarmed) demonstrations against the occupying forces. The stone and, occasionally, the Molotov cocktail and knife were its symbols, not guns and bombs.”[10] Nonetheless, Israel responded brutally to Palestinian resistance, even expelling the Palestinian pacifist leader Mubarak Awad.[11]

Israeli forces killed some 1,095 Palestinians during the Intifada. In February 1988, soldiers tried to bury four Palestinians alive, but were stopped. That same month, a CBS crew filmed four soldiers beating up two Palestinian youths for fifteen minutes near Nablus. Israel used collective punishment, such as demolishing houses and cutting off towns' electricity. During the uprising, Israel deported 66 Palestinians.[12]