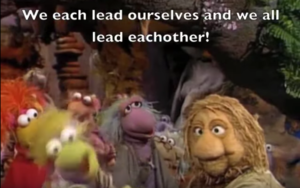 Fraggle Rock was a 1980s television show featuring Muppet (part marionette and part puppet) creatures called Fraggles who inhabit an subterranean society without hierarchy or laws. Creator Jim Henson, described by colleagues as a "gentle anarchist,"[1] intended the show to promote "world peace" and "international understanding." In fact, Fraggle Rock ended up being the first U.S. television show to be broadcast in the Soviet Union, perhaps playing some small part in tearing the Iron Curtain. According to Henson's daughter, "'Fraggle Rock' emphasized notions of community, environmentalism (and) spirituality."[2]

As Wembley Fraggle emphasizes, "Fraggles don't have any bosses [...] We each lead ourselves and we all lead each other." He then launches into a song describing their egalitarian ethos:

"For you can never, ever, ever/

No, you can never, ever, ever/

Aside from being fiercely egalitarian, the Fraggles' culture is largely devoted to pleasure and fun as summarized by the show's theme song ("Dance your cares away, worries for another day/ Let the music play, Down in fraggle rock") and in the song "Working" ("There's ping-pong games that must be played and songs that must be sung").[5]

"Red challenges traditional gender roles, both openly and tacitly. One of the best things about Fraggle Rock is that the other characters are totally fine with her behaviour. Sure, she can be abrasive and obnoxious at times, and yeah, she has a hard time admitting when she’s wrong, but these aren’t presented as being character flaws because she’s female; they’re presented as being negative traits because of the impact they have on herself and other people.

Oh, and in case you were wondering, Red is the best swimmer in Fraggle Rock. Better than any of the boys, even.

The neat thing about this show is that it’s not just Red who challenges gender roles; it’s Boober and Wembley too. It’s presented as being totally fine for Boober, a male Fraggle, to prefer to stay home all day washing socks and cooking. It’s also fine for Wembley to 'wemble', i.e. waiver with indecisiveness. That last one is especially interesting because a lot of Wembley’s 'wembling' comes from a place of not wanting to pick sides when his friends argue and, ultimately, not wanting to hurt anyone’s feelings. It’s pretty rare for a male character to be shown as being so openly emotional. Rare, but awesome."[7]

Fraggles have a thirty-minute workweek, and jobs include gathering radishes, collecting postcards, exploring above-ground society ("outer space"), doing laundry, and putting out fires.[8] They consider their work "enriching" and are very committed to getting it done. Each Fraggle is encouraged to pick an enjoyable job, and Mokey Fraggle likes her thirty-minute workweek so much that, she says, "Sometimes I put in two, maybe three minutes of overtime, just for fun."[9] Fraggles do not have bosses[10], although the fire-fighters' syndicate does elect a "president" whose tasks include interviewing new applicants.

Fraggles mainly live off radishes harvested from the Gorgs' garden and a radish-based substance that the Doozers use for construction.[11]

Fraggles are anti-consumerist, as shown by the fact that Wembley Fraggle has no belongings aside from the clothes he's wearing and a spare shirt ("I have to pack my thing").[12] They have a nearly zero-waste society, and although Marjorie calls herself a "trash heap," she is actually made of compost.[13]

The Fraggles, Doozers, and Grogs have a symbiotic relationship with each other, with Fraggles supplying water to Gorgs, Gorgs reluctantly supplying radishes to the Fraggles, and Fraggles eating the Doozers' scaffolding so the Doozers have enough room to keep building.[14]

Muppet Wiki explains the history of how ancient Fraggles went from a hierarchical society to "anarchy."

Ancient Fraggles fed on cave mushrooms. They were bald and wore hats to keep their heads warm. In contrast to their modern-day anarchy, the ancient Fraggles had leaders, laws (one of which forbade laughter), and prisons.

A prophecy held that a great and wondrous Fraggle named Blundig would one day come to rule the Rock. When Blundig finally showed up (during the reign of Fishface Fraggle), she made the revolutionary suggestion that Fraggles should abandon the idea of leaders in favor of each leading himself and all leading each other. It was she who invented the "dance your cares away" lyrics of the Fraggle Rock Theme, which were immediately recognized as an inspiring concept and ushered in a new era in Fraggle history.[15]

Underground, Fraggles live peacefully alongside the Doozers, a hierarchical society led by the Architect Doozer. Doozers enjoy construction work and spend their time building pointless scaffolding out of ground-up radishes. The Fraggles consider the scaffolding delicious and often eat it with permission from the Doozers. The Doozers explain they want the Fraggles to eat their architecture so that they'll always have room to build more.[16]

At one exit of Fraggle Rock, the Fraggles interact with Gorgs. The Gorgs consider Fraggles to be pests since Fraggles take radishes from their gardens[17]

Humans live at another exit. Fraggles call the humans "silly creatures from outer space" and, aside from Uncle Traveling Matt, do not directly interact with humans until they befriend one (Doc) in the last episode.