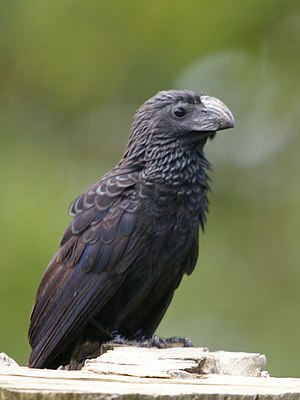 The groove-billed ani is a black bird with a long tail and large beak that lives in Latin America and southern Texas. Part of the cuckoo family, it lives in pastures and other open areas, and it feeds on insects and other arthopods.[1] The biologist Sandra Vehrencamp places the groove-billed ani on the egalitarian end of the "egalitarian-despotic spectrum" that she has developed.

"The groove-billed anis (Crotophaga spp.) are an excellent example of a relatively unbiased society," Vehrencamp writes, with the term "bias" referring to the degree of despotism in a species. The groove-billed anis live in groups of one to four monogamous breeding pairs. They share a communal nest, and the males and females all participate in incubating the eggs.

A female with "slight" dominance over other females will lay her eggs last and will throw some of the other females' eggs out of the nest before she has laid her own eggs. This gives this female a slightly higher chance of reproductive success. The males, however, do not demonstrate dominance over each other. In fact, the male who who mates with the slightly dominant female usually has to preform all of the night-time incubation and therefore has a higher risk of mortality than the other males. As a result, the males all have an equal reproductive success rate over their lifetimes.[2]