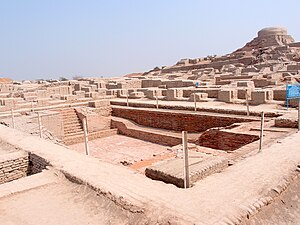 The Indus Valley Civilization, lasting from 2600 to 1900 BCE and with a population of five million people, has no strong evidence of having had warfare, inequality, or hierarchy.[1] Named after the Indus River, it encompassed at least 800,000 square kilometers in land now known as "Pakistan, India and Afghanistan."[2] In a 2020 Journal of Archaeological Research article, archaeologist Adam S. Green posited, "The Indus civilization was egalitarian, but this is not because it lacked complexity; rather, it is because a ruling class is not a prerequisite for social complexity."[3]

Explanations for its eventual collapsed include attacks from outsiders, climate change, and earthquakes.[5]

Burial sites indicate that people were buried with roughly equal amounts of burial goods. Luxury goods including stoneware bangels, carnelian beads, and stamp seals, were available to the entire population. Within each community, there was not much difference in the sizes of peoples' houses.[6]

There were no large temples and there is no strong evidence of priets.[7]

There were apparently three recognized genders. In addition to women and men, there were hijras. Often intersex or assigned maleness at birth, they adopted feminine traits and tended to be either celibate or sexually involved with men.[8]

There were no places, monuments to kings, or other indications of a state. One statue, theorized by earlier archeologists to be a "priest-king," is now widely considered to be a portrayal of a neighboring society.[9]

Farmers grew millets and rice in the summer and wheat and barley in the winter. Domesticated animals were used for meat, hide, bone, and traction.

There were large collective works including the Great Bath and Pillared Hall at Mohenjo-daro and nonresidential structures at Harappa. It is estimated that one of the foundation platforms at Mohenjo-daro would have required 10,000 builders for more than one year.[10] Andrew Robinson, writing in New Scientist speculates that some of this labor may have been coerced or even involved slavery,[11] but Green emphasizes that there is no evidence of a ruling class and that large projects can be coordinated horizontally.[12]

There is no evidence of military weaponry, and the artwork does not portray humans fighting other humans. The sole portrayal of a human fighting is a mythical depiction with the opponent represented as a female deity with goat horns and a tiger's body.[13] There is no evidence that the Indus civilization dominated smaller neighboring societies.[14]