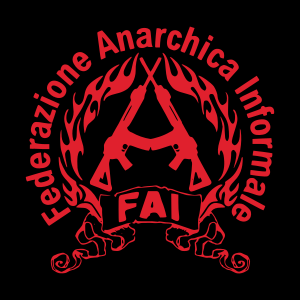 "Attack and destroy the responsible for repression and exploitation!

Revolt is contagious and can be reproduced!

Social war against capital and the State!"

The Informal Anarchist Federation, or Federazione Anarchica Informale (FAI) is an insurrectionist network that began in Italy and has since spread to Argentina, Bolivia, Chile, Greece, Indonesia, Mexico, the Netherlands, Peru, Russia, Spain, the United Kingdom, and the United States. In 1999, people under the FAI banner sent mail bombs to a Greek embassy in Italy and a tourism office and Citibank branch in Spain. Over the next few years, the FAI bombed various corporate and state targets in western Europe, mainly in Italy and Spain. However, the current iteration of the FAI, as an adoptable monkier with a distinguished philosophy, can be traced to late 2003 and early 2004 in Bologna, Italy.[2]

On 28 December 2003, a mail bomb exploded at the the European Commission head Romano Prodi's Bologna home. Over the next few days, six bombs were mailed to state targets across western Europe. Even though they were discovered and diffused before exploding, Bologna stopped package deliveries to European Union institutions.[3] Taking responsibility for the action, FAI members published an "Open Letter to the Anarchist & Anti-Authoritarian Movement" at the end of 2003. The letter proclaimed the federation's aims and structure:

"We strongly believe that only a chaotic and horizontal organisation, without bosses, authorities or central committees taking decision, can fulfil our need for freedom here and now. Our goal is to have an organisation reflecting the view of the anarchist society, which we struggle for."[4]

They expressed opposition to democracy, which they associated with "representatives, delegates, official meetings, committees, and organs implying the election of leaders, charismatic figures and the imposition of specialists of speech." They also rejected Marxism as "nothing more than a fascinating and dangerous siren that claims freedom for the oppressed but actually denies the possibility of a free society and just substitutes one dominion with another."[5]

The letter gave both philosophical and strategic reasons for having a decentalized and informal structure. Philosophically, they "do not believe in vanguards nor do we think that we are an enlightened active minority. We just want to live as anarchists her and now." Strategically, they emphasize that the autonomy and anonymity of each cell makes the federation as a whole much harder for authorities to infiltrate: "if by some unfortunate chance infiltrators or informers should come out, this would affect a single group without spreading to others."[6]

The FAI has strongly supported the Conspiracy of Cells of Fire since the latter network's emergence in 2008. Several FAI actions in 2014 were jointly claimed with the Earth Liberation Front.