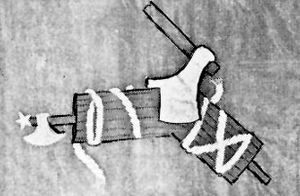 The Arditi del Popolo (The People's Daring Ones) were co-founded in Rome in June 1921 by Argo Secondari, an Anarchist. A decentralized anti-fascist militia, they included Anarchists, Communists, Socialists, and republicans. Within months of its founding, Arditi had 144 sections with 20,000 members.[1]

Arditi arose in opposition to Benito Mussolini's National Fascist Party and squadristi vigilantes (Black Shirts) who intimidated organized workers and leftists. Earlier in 1921, the squadristi had murdered an Anarchist worker and then attacked his funeral.[2]In July, when the squadristri attempted to return into the town, the Arditi fended them off and killed twenty fascists in battle.[3]

During 1921, both the Socialist Party and the Communist Party withdrew their support from Arditi. The Socialist Party even signed a "Pact of Pacification" with Mussolini. The Italian Anarchist Union and Italian Syndicalist Union became the only leftist institutions that still supported Arditi.[4] M. Testa comments, "Working-class militants, then as now, could not rely on the reformist party's opposition to fascism or on the police, and had to defend themselves from fascist violence. They set up militias to protect their printing presses, union meetings and social clubs."[5]

Mark Bray offers a number of reasons why Arditi did not succeed in stopping Mussolini's rise to power in 1922: <blockuqote> The Arditi del Popolo were unable to withstand the Fascist onslaught for several reasons, including the strong financial and material support the Fascists received from economic elites, the fact that much leftist infrastructure had already been smashed by the time Arditi were formed, and the inability of the Left to cooperate for the destruction of their common enemy.[6]

On 11 September 1926, Gino Lucetti threw a grenade at Mussolini's car. It bounced off the windshield and exploded nearby. Mussloni's guards arrested Lucetti and his accomplices Leandro Sorio and Stefano Vatteroni. Sentenced to thirty years in prison, Lucetti spent the first three in solitary confinement. Lucetti was shot and killed after an escape from prison in 1943.[7]

Lucetti was not the only one intent on killing Mussolini. Shortly after this first attempt on Il Duce, Anteo Zamboni, the fifteen-year-old son of Bolognese anarchists, was stabbed then shot to death by fascist bodyguards under dubious circumstances. He had been accused of shooting at Mussolini, although the shot may have been fired by one of the dictator’s own entourage, extremist fascists who intended to force Mussolini’s hand. As Mussolini was standing in the back of an open topped car the bullet hit him in the chest. In typical style, he later claimed that ‘Nothing can hurt me!’ adding the story to his personal mythology. He forgot to mention the small and not insignificant matter of the bullet proof vest he wore beneath his uniform.[8]