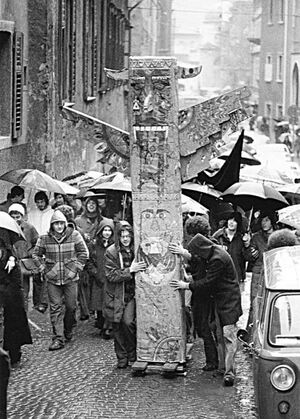 Italian student protests of the 1960s found strong support among factory workers and continued into the 1970s alongside strong feminist and counter-cultural youth movements. The combined revolt "was so intense that the rebels were called a 'second society.'"[1]

The movements became known as Autonomia based on their insistence on autonomy from hierarchical unions and Communist parties. Georgy Katsiaficas argues, "Although it failed to provoke the revolution it advocated, Autonomia's impact helped reform Italian universities and workplaces. The workweek was shortened, housing modernized, universities brought into the modern era, and women's status improved."[2]

In the "Hot Autumn" of 1969, 5.5 million workers, over a quarter of the workforce, went on strike. Workers occupied and sabotaged factories. White-collar workers joined factory workers on strike, as did migrants from southern Italy who were traditionally used as strikebreakers in the more industrialized north. The workers won major wage increases, but their demands were much broader: less toxic fumes in the workplace, an end to salary differences and other measures used to pit the workers against each other. "We want everything," factory workers in Turin declared.[3]

Workers experimented with new tactics to disrupt their factories' production. During "hiccup strikes," workers idled until the boss ordered them to resume working. They would sometimes repeat this tactic every half hour. In "checkerboard strikes," one section of a factory walked off the job, and upon their return another section walked off. "Red handerkchiefs," or protesters wearing red handkerchiefs to conceal their faces, would defend strikers and intimidate their managers. Taken aback by the spontaneous uprisings, the Communist-controlled unions negotiated wage increases with management. Wages went up by 23 percent from 1969 to 1970 and by 17 percent from 1970 to 1971.[4]

In the early 1970s, Italian law classified rape as merely a crime "against morality," much less serious than crimes against "personal integrity" like murder and assault. The maximum sentence was five years, and the perpetrator could avoid punishment by offering to marry the victim. Abortion was illegal, except in cases of rape and incest.

Forming consciousness-raising groups, women's centers, and underground abortion clinics, women in the 1970s drastically changed Italian society.[5] In Rome in 1976, Claudia Caputi was gang-raped. She called for a police investigation, and as her case came to trial in April 1977, she was gang-raped again and slashed with razors all over her body, in an attempt to get her to drop the case. Within a few hours, 15,000 women marched through her neighborhood in solidarity.[6] In "Reclaim the Night" marches, thousands of women dressed as witches, carried broomsticks, and defiantly chanted, "No longer mothers, no longer daughters, we're going to destroy families."[7] In 1978 or 1979, Italy's legislature passed "one of the most progressive laws in Europe governing abortion."[8] The spread of feminist ideas transformed "conditions of everyday life for millions of women by providing them with a new-felt sense of self."[9]

The student movement "erupted throughout the country" in 1968, in colleges and high schools. Through the 1960s, the movement held to a "countercultural style, anti-authoritarianism, and democratic self-management".[10] Many of the students' demands were met in the coming decade, including the admittance of working-class students into university, and a national program providing thousands of factory workers with paid leave for university study.

Marxist-Leninist groups largely took over the student movement in the 1970s, and some young people responded by forming expressly anti-authoritarian groups like the Metropolitan Indians. Described by Katsiaficas as "egalitarian," the Metropolitan Indians dressed up as American Indians, the marginalized "other" in Italy's spaghetti western films. They were determined to live a life beyond survival, even if it meant breaking the law: stealing records and liquor, refusing to pay for food at fancy restaurants, plundering tennis rackets and fishing poles.[11] They published a manifesto on 1 March 1977, demanding:

On 1 February 1977, about 100 armed fascists attacked and shot students at the University of Rome. The next day, thousands of youth protested at the fascists' office. Police fired at the protesters, wounding four. Students patrolled the university and set up checkpoints to keep the fascists out. In solidarity with the Rome students, students across Italy went on strike and occupied buildings. The Communist-controlled unions were not sympathetic. On 17 February, they sent a spokesperson Luciano Lama to the University of Rome to convince students to end their occupation. In his talk, Lama called the students "parasites at the expense of productive labor." Students heckled him, and a fight broke out between Lama's security guards and masked autonomists. The autonomists succeeded in evicting Lama, but 2,000 police entered the university, liberally spraying tear gas and swinging clubs. Days later, over 50,000 autonomists marched through Rome against the police, unions, and the Communists.

As autonomist protests spread around the country, so did police repression. On 11 March, police shot and killed the activist Francesco Lorusso. The next day, police attacked a national demonstration in Rome. Thousands of demonstrators fought back, pushed the police out of the city center and set up barricades. Clashes also broke out in Rome, Turin, Padova, Lecce, and Messma. On 21 April, police shot at students at the University of Rome. Some students shot back, killing an officer. On 12 May, police shot at protesters in Rome and killed 19 year-old Giorgiana Masi. The next day, protesters shot and killed a cop in Milan.[13]

The 1970s saw a rise in guerrilla actions by groups like the (Maoist) Red Brigades. On 16 March 1978, the Red Brigades kidnapped President Aldo Moro and demanded the release of Red Brigade prisoners. When the government refused, the Brigades executed Moro. On 7 April 1979, over 300 activists were arrested, including, famously, Toni Negri who was falsely accused of being the Brigades' leader. On strategic grounds, Katsiaficas harshly criticizes the Brigades' kidnapping of Moro:

More than any other single event, Moro's kidnapping and murder constricted the possibilities of autonomous political engagement. By kidnapping Moro, the RB reproduced the values of the system, helped turn thousands of former activists into spectators, and made the popular movement seem unimportant.[14]