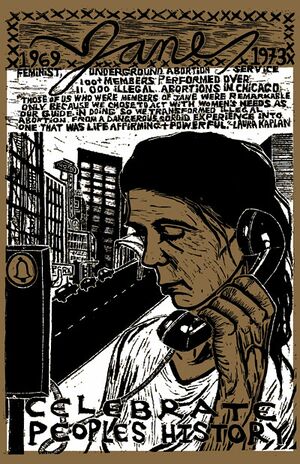 From 1969 to 1973, the four years preceding the Roe v. Wade ruling that legalized abortion in the United States, The Abortion Counselling Service of Women's Liberation or "Jane" illegally provided underground counselling and abortion services in Chicago. At first, Jane referred women to other abortion providers, but eventually Jane members performed abortions themselves. Over 100 women were members of Jane throughout its duration, and members estimate that they performed over 11,000 abortions.[1]

Jane members organized themselves horizontally, and they sought to communicate with patients to prevent the formation of a hierarchy of abortionists over the patients. Jane's affinity for anarchism is demonstrated by the fact that Jane briefly operated the Emma Goldman's Women's Health Center after the Roe v. Wade ruling.[2] Jane member Laura Kaplan reflects on the group's anti-authoritarian ethos:

In reaction to the hierarchy of male leadership, both in society and on the left, that relegated women to the bottom, radical women intended to create a movement without leaders or stars in order to share power and promote personal growth.

Jane members incorporated into their practice a challenge to special privilege. While the assistant prepped a woman, the person who was going to perform the abortion took the assistant's place sitting by the woman's side and holding her hand. Then the two women switched places, as if there were no difference between the assistant and the abortionist. Service members wanted the women who came through Jane to understand that, with training, any of them could do it, so that they would not be intimidated by someone else's special skill.

The secret nature of the service precluded the possibility of any member becoming a movement star. For security reasons, no one outside of the group knew exactly who was subsumed under the anonymous title Jane. As a result, the service attracted women who relished anonymity.[3]

In a 2016 Solecast interview, a Crimethinc member points to Jane as an example of how the State enacts reforms in response to direct action. "The legalization of abortion in this country, which has been threatened for so long, that didn't come out of nowhere. It was preceded by grassroots direct action projects providing abortion access to women in a time when it was illegal, the Jane project, the Jane network in Chicago being the most famous example of this, you know? Anything that we're able to do for ourselves directly they will promise to do for us through the system."[4]