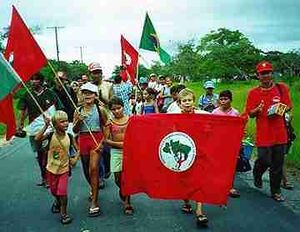 Brazil today bears a similarity with Spain in 1936, in that a tiny percentage of the population owns nearly half of all the land while millions of people are without land or sustenance. A major social movement has sprung up in response. The Movimento dos Trabalhadores Rurais Sem Terra (MST), or Landless Workers’ Movement, is made up of 1.5 million impoverished laborers who occupy unused land to set up farming collectives. Since its founding in 1984, the MST has won land titles for 350,000 families living in 2,000 different settlements. The basic unit of organization consists of a group of families living together in a settlement on occupied land. These groups retain autonomy and self-organize matters of day-to-day living. To participate in regional meetings they appoint two or three representatives, which in principle include a man and a woman though in practice this is not always the case. The MST has a federative structure; there are also State and National Coordinating Bodies. While most of the decision-making takes place at the grassroots level with land occupations, farming, and the establishment of settlements, the MST also organizes at higher levels to coordinate massive protests and highway blockades to pressure the government to give land titles to the settlements. The MST has shown a great deal of innovation and strength, organizing schools and protecting themselves against frequent police repression. They have developed practices of sustainable agriculture, including setting up seed banks for native seeds, and they have invaded and destroyed environmentally harmful eucalyptus forestry plantations and test grounds for genetically modified crops.

Within the logic of democracy, 1.5 million people is considered simply too large a group for everyone to be allowed to participate directly in decision-making; the majority should entrust that power to politicians. But the MST holds an ideal in which all possible decision-making remains on the local level. In practice, however, they often do not meet this ideal. As a massive organization that does not seek to abolish capitalism or overthrow the state but rather to pressure it, the MST has been brought into the game of politics, in which all principles are for sale. Furthermore, a huge portion of their members come from extremely poor and oppressed communities that for generations had been controlled by a combination of religion, patriotism, crime, drug addiction, and patriarchy. These dynamics do not disappear when people enter into the movement, and they cause significant problems within the MST.

Throughout the 80s and the 90s, new MST settlements were created by activists from the organization who would seek landless people in rural areas or especially in the favelas, the urban slums, who wanted to form a group and occupy land. They would go through a base-building period of two months, in which they would hold meetings and debates to try to build a sense of community, affinity, and political common ground. Then they would occupy a piece of unused land owned by a major landlord, choose representatives to federate with the larger organization, and begin farming. Activists working with the MST local would pass through periodically to see if the settlement needed help acquiring tools and materials, resolving internal disputes, or protecting themselves from police, paramilitaries, or major landlords, all of whom frequently conspired to threaten and assassinate MST members.

In part due to the autonomy of each settlement, they have met with a variety of outcomes. Leftists from other countries typically romanticize the MST while the Brazilian capitalist media portray them all as violent thugs who steal land and then sell it. In fact, the capitalist media portrayal is accurate in some cases, though by no means in a majority of cases. It is not unheard of for people in a new settlement to divide up the land and later fight over the allotments. Some might sell their allotment to a local landlord, or open a liquor store on their allotment and fuel alcoholism, or encroach on their neighbor’s allotment, and such boundary disputes are sometimes resolved with violence. The majority of settlements divide into completely individualized, separate homesteads rather than working the land collectively or communally. Another common weakness reflects the society from which these landless workers come — many of the settlements are dominated by a Christian, patriotic, and patriarchal culture.

Though its weaknesses need to be addressed, the MST has achieved a long list of victories. The movement has won land and self-sufficiency for a huge number of extremely poor people. Many of the settlements they create enjoy a much higher standard of living than the slums they left behind, and are bound by a sense of solidarity and community. By any measure their accomplishment is a triumph for direct action: by disregarding legality or petitioning the powerful for change, over a million people have won themselves land and control over their lives by going out and doing it themselves. Brazilian society has not collapsed due to this wave of anarchy; on the contrary it has become healthier, although many problems remain, in the society at large and in the settlements. It largely comes down to circumstance whether a particular settlement is empowering and liberated or competitive and oppressive.

According to an MST member who worked for several years in one of the most dangerous regions of Brazil, two months was simply not enough time in most cases to overcome people’s anti-social training and create a real sense of community, but it was much better than the prevalent pattern in the subsequent period. As the organization experienced a rush to grow, many activists began slapping together settlements by recruiting groups of strangers, promising them land, and sending them off into the regions with the poorest soil or most violent landlords, often contributing to deforestation in the process. Naturally, this emphasis on quantitative results amplified the worst characteristics of the organization and in many ways weakened it, even as its political power increased.[1]

The context for this watershed in the MST was the election of President Lula of the Workers Party (PT) in 2003. Previously, the MST had been autonomous: they did not cooperate with political parties or allow politicians into the organization, although many organizers used the MST to launch political careers. But with the unprecedented victory of the progressive, socialist Workers Party, the leadership of the MST tried to forbid anyone in the organization from publicly speaking out against the government’s new agrarian policy. At the same time, the MST began receiving huge amounts of money from the government. Lula had promised to give land to a certain number of families and the MST leadership rushed to fill this quota and engorge their own organization, abandoning their base and their principles. Many influential MST organizers and leaders, backed by the more radical settlements, criticized this collaboration with the government and pushed for a more anti-authoritarian stance, and in fact by 2005, when the PT’s agrarian program proved to be a disappointment, the MST began fiercely challenging the government again.

In the eyes of anti-authoritarians the organization had lost its credibility and proven once again the predictable results of collaboration with the government. But within the movement there are still many causes for inspiration. Many of the settlements continue to demonstrate the ability of people to overcome their capitalist and authoritarian socialization, if they take it upon themselves to do so. Perhaps the best example are the Comunas da Terra, a network of settlements that make up a minority within the MST, that farm the land communally, nurture a spirit of solidarity, challenge sexism and capitalist mindsets internally, and create working examples of anarchy. It is notable that the people in the Comunas da Terra enjoy a higher standard of life than those who live in the individualized settlements.