From Harold Barclay, People Without Government: An Anthropology of Anarchy:

Over a third of a million Lugbara dwell in southern Uganda and northern Zaire. As horticulturalists they grow chiefly eleusine and sorghum, but they also keep some cattle. The Lugbara live on open rolling plains in a highland area of 4-5,000 feet elevation. They, like their neighbours, are politically decentralised, traditionally having no chiefs and the fundamental form of social organisation is the segmentary lineage.[1]

The basic social grouping is the family, either some type of joint family or a nuclear group. Families related through males and dwelling in a neighbourhood comprise a 'family cluster' or minimal lineage of three to four generations depth. The cluster might also include individuals who are not members of the lineage group, such as a sister's son or daughter's husband. It might also have 'clients' residing within it. These are persons who escaped from their own homes in times of war or famine, or who had been expelled for some offence. Except for those clients who had not married into the cluster, the residents are subject to the elder of the group, who is its genealogically senior member. His authority is primarily ritual in that he can invoke the ancestral ghosts, who have influence only on their descendents.

The lineage owns the territory within which its members reside and the elder allocates use rights within it as well as the rights to its resources, including daughters of the lineage. Further, he is in control of the use of livestock. Within the minimal lineage the elder is responsible for settling disputes. He may also initiate hostile relations with other groups.

Related minimal lineages form yet another lineage segment (minor lineage), which in turn is consolidated into larger segments (major lineages) and these in turn constitute sub clans which consolidate to form clans. However, the number of levels of segmentation among the Lugbara varies. The following diagram of the levels of segmentation within a Lugbara tribe shows on the right side the various segments as territorial units, beginning at the lowest level of the family cluster and culminating in the subtribe. On the left side of the diagram is the segmentary system in terms of descent groups, commencing with the smallest segment, the minimal lineage, whose personnel is roughly equivalent to the territorial unit, the family cluster. (It will be recalled that some residents of the family cluster are not agnatic kinsmen.) Correspondingly each higher level of segmentation of the descent groups has an approximate correspondence to equivalent levels of territorial groups. Again, the rough correspondence results from the fact that while . territories are identified with a given descent group, they may include residents not belonging to that descent group. 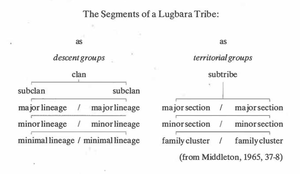 The major lineage comprises a most strategic segment within Lugbara society since it is within this group that marriage and fratricide are prohibited and kinship terms are used as forms of address. The major lineage is the feud unit: the body that presumably unites to engage in hostilities against other equivalent segments and within which feuding is not supposed to occur, although it does occasionally.

Within the minor lineage only fighting with sticks and fists is permitted: no bows and arrows or spears can be used since there is no technique, ritual or otherwise, by which the group can deal with the fratricide which might result. We have encountered this notion before: that fratricide, that is, murder carried out within a closely related group, is so horrendous that the community has no established means to deal with it. Nevertheless, a Lugbara killer would marry his victim's widows and donate a bull to the victim's mother's brother, but still this does not repair the injury done. A killing between minor segments of the same lineage is also a heinous deed, but compensation in the form of cattle is considered payable to re-establish group harmony. A homicide involving two major lineages entails no compensation, but rather retaliation may be resorted to. Such fighting can go on between groups for some time. Eventually, when everyone gets tired of hostilities, elders from both sides, in addition to elders from related but uninvolved lineages, gather and negotiate a peace. Should the parties continue to fight the elders may invoke a collective curse upon them. In the curse those ancestral ghosts common to the conflicting parties are asked to bring sickness upon all those who disobey.

Killings within a tribe and between its subclans are compensated for, but beyond this level there is no compensation and the fighting that goes on between tribes continues until third parties are able to intervene successfully, or until the matter is forgotten.

As is usual in other systems of this sort, the most intense feelings of identification, and the most active functioning in terms of mutual interrelationship, is at the minimal level. This gradually decreases as one ascends to encompass larger and larger groups and numbers of people, until one can say that the tribal level has little or no significance. Nevertheless, all Lugbara have the belief that they are all kin. They express their own social relations by speaking of groups which are juru, wherein potentially hostile relations obtain, and those which are o'dipi, which include all those within a group's direct social relations which are not juru. Ordinarily o'dipi refers to the agnatic descendants of a common ancestor, often a man's major lineage. Thus, as with the latter, among o'dipi there is supposed to be no fighting, no intermarriage and any girl is called 'sister'. At any given time a group may be regarded as juru and later it may become o'dipi.

The chief form of sanction in Lugbara society is religious. Ancestral ghosts may themselves directly impose their vengeance through sickness. Otherwise the elder may invoke the power of the ghosts against individuals, including his own dependants within the family cluster. The power of the ghost invocation by an elder extends as far as there are common ghosts. Non-agnatic kin may curse one another for breaches of kinship ties. Witchcraft accusations are directed against neighbours. Within the community of kin and neighbours, order is maintained through these several supernatural sanctions, all of which form a single mystical system. The rainmaker is a powerful figure in Lugbara society, as he is in many neighbouring groups. Among the northern Lugbara, where he is the senior member of the senior line of the senior major lineage of a subclan, he is able to bring an end to hostilities by calling people together to prohibit fighting on pain of his cursing those who do not obey. In some areas wrongdoers may find a sanctuary in-his person.

Other important men in Lugbara society are 'men whose names are known'. These are invariably wealthy men, but they also have admirable character and thus attract a following. Their influence may spread over several tribes and their status is neither attached to the lineage system nor is it hereditary. They carry white staves as symbols of their position. Like the rainmakers they can curse combatants in a feud and may act as a sanctuary for a refugee and as a mediator in quarrels. For a short period, first in 1895 and again in 1910 'prophets' appeared among the Lugbara and had some influence.

The Lugbara have unmistakable anarchic characteristics. Yet there exist certain specific kinds of persons - rainmakers and 'men whose names are known' - who have a superior cursing power which sets them off as privileged individuals. Here we have the beginning of a proto-governmental structure.