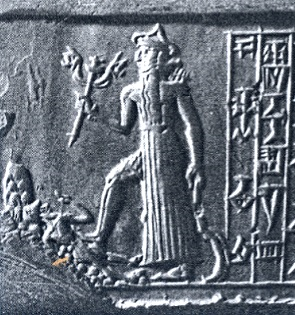 Nergal, the god to whom the city's temple was devoted

Mashkan-shapir was an ancient Mesopotamian city which the archeologists Elizabeth Stone and Paul Zimansky say had a "relatively uncentralized" social structure. Although there was a temple and a walled-off administrative building, these sites were clustered apart from the harbor and city gates where commerce took place. Additionally, "Mesopotamian texts do not identify clearly differentiated social classes. Instead they record the importance of general assemblies in decision making." The archeologists conclude that "the grounds for seeking the origins of civilization in processes of conquest and coercion seem, at the very least, far from compelling."[1]

"intensive archaeological survey of the city’s harbour, gateways and residential districts revealed a strik- ingly even distribution of wealth, craft production and administrative tools across the five main districts, with no obvious centre of commercial or political power"[2]