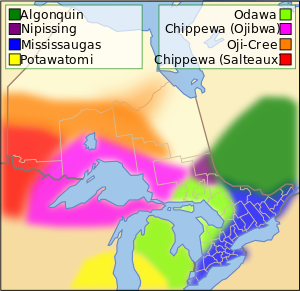 The Nishnaabeg (or Anishaabeg), meaning "the people," refers to an indigenous nation encompassing the Ojibwe, Odawa, Potawatomi, Mississauga, Saulteaux, and Omàmìwinini. At different points in history, the peoples of this nation have formed confederacies.[1] They reside in the lands today colonized by the "United States" and "Canada."

Nishnaabeg tradition centers around a set of ethics, values and practices called Bimaadiziwin, "living the good life." The culture balances "strong individual autonomy and freedom" with the "needs of the collective" and with "the natural world."[2]

In Nishnaabeg tradition, children's education is self-directed, and children are encouraged to learn what the land and animals teach them. For example, a legend tells of a girl named Kwezen who watched a red squirrel nibbling on a tree. Kwezens decided to drill a hole and drink the sap herself. She showed the sap to her mother, who showed it to the broader community. Ever since, the community has collected sap. According to Leanne Simpson, Kwezens "already understands the importance of observation and learning from our animal teachers."[3] In this culture, individuals "carry the responsibility for generating meaning within their own lives."[4]

Michi Saagiig Nishnaabeg culture considers children to be "full citizens with the same rights and responsibilities as adults," according to Leanne Betasamosake Simpson.[5]

Nishnaabeg traditions did not have a strict gender binary.[6] The Ojibwe had words for people who were assigned one gender at birth but adopted the traits of the other gender. Someone who was assigned maleness but chose to be a woman was called ikwekaazo (one who endeavors to be like a woman), and someone who was assigned femaleness but cohse to be a man was called ininiikaazo (one who endeavors to be like a man). According to Nishnaabeg historian Anton Treuer, "Both were considered to be strong spiritually, and they were always honored, especially during ceremonies."[7]

Potawatomi culture encourages sharing and portrays a monster named Windigo who "suffers from the illness of taking too much and sharing too little."[8]

70% of the Potawatomi language consists of verbs, comprising what Robin Wall Kimmerer calls a "grammar of animacy." Rather than speaking of other beings or features as an "it," one typically speaks in terms of processes. For example, a bay is expressed with a verb meaning "to be a bay" (wiikwegamaa).[9]

Leanne Betasamoksake Simpson writes, "Authoritarian power—aggressive power that comes from coercion and hierarchy—wasn’t a part of the fabric of Michi Saagiig Nishnaabeg philosophy or governance, and so it wasn't a part of our families."[10]

Custom said that individuals "could only take as much as they needed, that they must share everything, following Nishnaabeg redistribution of wealth customs, and no part of the animal could be wasted."[12]

Nishnaabeg custom says that when making a decision, a community must consider its impact on plants and animals and on the next seven generations of humans.[13]

The precolonial Nishnaabeg made treaties with surrounding animal nations. For example, they agreed with the fish nations that humans would only fish at certain times of the year and at certain places. They would only catch as much as they needed to eat. Treaties with other animal nations said that humans would preserve forests and that human hunters will not let meat go to waste. A general agreement with the animal nations formed, according to tradition, a time long ago after animals left the territory in protest of humans wasting meat and disrespecting animals. The animal nations formed a council and the chief deer put forth a request to the Nishaabeg, "Honour and respect our lives and our beings, in life and in death. Cease doing what offends our spirits. Do not waste our flesh. Preserve fields and forests for our homes." The Nishnabeeg agreed, and the animals returned to the land.[14]

In precolonial times, the Nishnabeeg signed a treaty with the Haudenosaunee called Gdoo-naaganinaa, meaning "Our dish." The treaty recognized the fact that the two parties ate from a shared "dish" since they shared hunting areas and overlapping plant and animal species depended on the health of both parties' lands. The treaty said that neither party could abuse the landbase, and Nishnabeeg and Haudennosaunne delegates were required to regularly gather for meetings and rituals.[15]