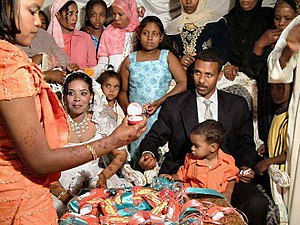 The Nubians are a society of sedentary farmers in Egypt. They were traditionally stateless, and even according to recent accounts they consider it highly immoral to bring in the government to solve disputes. In contrast to the individualistic and legalistic ways of viewing disputes in authoritarian societies, the norm in Nubian culture is to consider one person’s problem everyone’s problem; when there is a dispute, strangers, friends, relatives, or other third parties intercede to help the disputants find a mutually satisfying resolution. According to anthropologist Robert Fernea, Nubian culture regards quarrels between members of a kinship group as dangerous, in that they threaten the supportive social net on which all depend.

This culture of cooperation and mutual responsibility is backed up by economic and social structures as well. Among the Nubians, property such as waterwheels, cattle, and palm trees have traditionally been communally owned, so in the daily work of feeding themselves people are immersed in cooperative social bonds that teach solidarity and the importance of getting along. Additionally, the kinship groups which comprise Nubian society, called “nogs,” are interwoven, not atomized like the isolated nuclear families of Western society: “This means that a person’s nogs are overlapping and involve diverse, dispersed membership. This feature is very important, for the Nubian community does not easily split into opposing factions.”[1] Most disputes are resolved quickly by a third relative. Larger disputes that embroil more people are solved in a family council with all the members of the nog, including women and children. The council is presided over by an elder kinsman, but the goal is to reach consensus and get the disputants to reconcile.