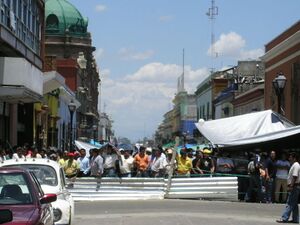 The rebellion in the southern Mexican state of Oaxaca offer another example of popular decision-making. In 2006, people took over Oaxaca City and much of the state. The population of Oaxaca is over half indigenous, and the struggles there against colonialism and capitalism go back five hundred years. In June 2006, 70,000 striking teachers gathered in Oaxaca de Juarez, the capital, to press their demands for a living wage and better facilities for the students. On June 14, the police attacked the teacher’s encampment, but the teachers fought back, forcing the police out of the center of the city, taking over government buildings and evicting politicians, and setting up barricades to keep them out. Oaxaca City was self-organized and autonomous for five months, until federal troops were sent in.

After they forced the police out of the capital city, the striking teachers were joined by students and other workers, and together they formed the Asamblea Popular de los Pueblos de Oaxaca (Popular Assembly of the Peoples of Oaxaca). The APPO became a coordinating body for the social movements of Oaxaca, effectively organizing social life and popular resistance for several months in the vacuum created by the collapse of state control. It brought together delegates from unions, non-governmental organizations, social organizations, and cooperatives across the state, seeking to make decisions in the spirit of indigenous practices of consensus — although most assemblies made decisions with a majority vote. APPO founders rejected electoral politics and called for people throughout the state to organize their own assemblies at every level.[1] Recognizing the role of political parties in co-opting popular movements, the APPO banned them from participating.

According to one activist who helped to found the APPO:

So the APPO was formed to address the abuses and create an alternative. It was to be a space for discussion, reflection, analysis, and action. We recognized that it shouldn’t be just one organization, but rather a blanket coordinating body for many different groups. That is, not one ideology would prevail; we would focus on finding the common ground among diverse social actors. Students, teachers, anarchists, Marxists, churchgoers — everyone was invited.

The APPO was born without a formal structure, but soon developed impressive organizational capacity. Decisions in the APPO are made by consensus within the general assembly, which was privileged as a decision-making body. In the first few weeks of our existence we created the APPO State Council. The council was originally composed of 260 people — approximately ten representatives from each of Oaxaca’s seven regions and representatives from Oaxaca’s urban neighborhoods and municipalities.

The Provisional Coordination was created to facilitate the operation of the APPO through different commissions. A variety of commissions were established: judicial, finance, communications, human rights, gender equity, defense of natural resources, and many more. Proposals are generated in smaller assemblies of each sector of the APPO and then brought to the general assembly where they are debated further or ratified.[2]

Time and again, spontaneous popular assemblies such as the one created in Oaxaca have proved capable of making sound decisions and coordinating the activities of an entire population. Naturally, they also attract people who want to take over social movements and people who consider themselves natural leaders. In many revolutions, what begins as a horizontal, libertarian rebellion becomes authoritarian as political parties or self-appointed leaders co-opt and shut down popular decision-making structures. Highly visible participants in popular assemblies can also be pushed towards conservatism by government repression, since they are the most visible targets.

This is one way to interpret dynamics that developed in the APPO after the federal invasion of Oaxaca in late October, 2006. As the repression intensified, some of the more vocal participants in the assembly began calling for moderation, to the dismay of the segments of the movement that were still in the streets. Many APPO members and movement participants complain that the group was taken over by Stalinists and other parasites who use popular movements as tools for their political ambitions. And though the APPO had always taken a stand against political parties, the self-appointed leadership took advantage of the difficult situation to call for participation in the upcoming elections as the only pragmatic course of action.

Many people felt betrayed. Support for collaboration was far from universal within APPO; it was controversial even within the APPO Council, the provisional decision-making group that was emerging as a leadership body. Some people within the APPO created other formations to disseminate anarchist, indigenist, or other anti-authoritarian perspectives, and many just went on with their work and ignored the calls to flock to the voting booths. In the end, the anti-authoritarian ethic that constituted the backbone of the movement and the basis of its formal structures proved stronger. The vast majority of Oaxacans boycotted the elections, and the PRI, the conservative party that already held power, dominated among the few people who came out to cast ballots. The attempt to transform the powerful, liberatory social movements of Oaxaca into a bid for political power was an absolute failure.

A smaller Oaxacan city, Zaachila (pop. 25,000), can provide a closer look at horizontal decision-making. For years, groups had been working together against local forms of exploitation; among other efforts, they had managed to defeat the plan to construct a Coca Cola plant which would have consumed much of the available drinking water. When the rebellion erupted in Oaxaca City, a majority of the residents decided to take action. They convoked Zaachila’s first popular assembly with the ringing of the bells, calling everyone together, to share the news of the police attack in Oaxaca City and to decide what to do in their own town. More meetings and actions followed:

Men, women, children, and city council members joined together to take over the municipal building. A lot of the building was locked and we only used the hallways and the offices that were open. We stayed in the municipal building night and day, taking care of everything. And that’s how the neighborhood assemblies were born. We’d say, “It’s the neighborhood of La Soledad’s turn and tomorrow it’s up to San Jacinto.” That’s how the neighborhood assemblies were first used, and then later they turned into decision-making bodies, which is where we are now.

The seizing of the municipal building was totally spontaneous. The activists from before played a role and initially directed things, but the popular assembly structure was developed little by little...

Neighborhood assemblies, comprised of a rotating body of five people, were also formed in each section of town and together they would form the permanent popular assembly, the People’s Council of Zaachila. The people from neighborhood assemblies may not be activists at all, but little by little, as they follow their obligation to bring information back and forth from the Council, they develop their capacity for leadership. All the agreements made in the Council are studied by these five people and then brought back to the neighborhoods for review. These assemblies are completely open; anyone can attend and have their voice heard. Decisions always go to a general vote, and all the adults present can vote. For example, if some people think a bridge needs to be built, and others think we need to focus on improving electricity, we vote on what the priority should be. The simple majority wins, fifty-percent plus one.[3]

The townsfolk kicked out the mayor while maintaining public services, and also established a community radio station. The city served as a model for dozens of other municipalities throughout the state that soon proclaimed their autonomy.

Years before these events in Zaachila, another group was organizing autonomous villages in the state of Oaxaca. As many as twenty-six rural communities affiliated with the CIPO-RFM (Council of Indigenous Peoples of Oaxaca — Ricardo Flores Magon), an organization that identifies with southern Mexico’s tradition of indigenous and anarchist resistance; the name references an indigenous anarchist influential in the Mexican Revolution. Insofar as they can, living under an oppressive regime, the CIPO communities assert their autonomy and help one another to meet their needs, ending private property and working the land communally. Typically, when a village expressed interest in joining the group, someone from the CIPO would come and explain how they worked, and let the villagers decide whether or not they wanted to join. The government frequently denied resources to CIPO villages, hoping to starve them out, but it is no surprise that many people thought they could live more richly as masters of their own lives, even if it meant greater material poverty.